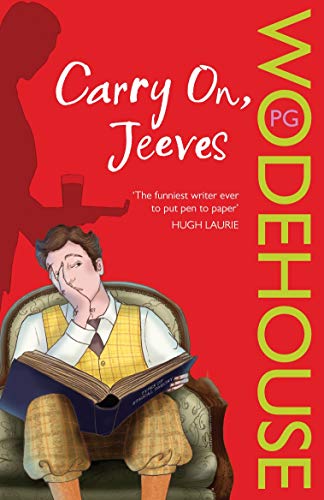 In Stock
£5.49
A Jeeves and Wooster collectionThese marvellous stories introduce us to Jeeves, whose first ever duty is to cure Bertie's raging hangover ('If you would drink this, sir...
Very Good Good Well Read
11 in stock

A Jeeves and Wooster collection These marvellous stories introduce us to Jeeves, whose first ever duty is to cure Bertie's raging hangover ('If you would drink this, sir... it is a little preparation of my own invention. It is the Worcester Sauce that gives it its colour. The raw egg makes it nutritious. The red pepper gives it its bite. Gentlemen have told me they have found it extremely invigorating after a late evening.') And from that moment, one of the funniest, sharpest and most touching partnerships in English literature never looks back...

"It's dangerous to use the word genius to describe a writer, but I'll risk it with him" * John Humphrys *
"For as long as I'm immersed in a P.G. Wodehouse book, it's possible to keep the real world at bay and live in a far, far nicer, funnier one where happy endings are the order of the day" * Marian Keyes *
"Wodehouse always lifts your spirits, no matter how high they happen to be already" * Lynne Truss *
"The incomparable and timeless genius - perfect for readers of all ages, shapes and sizes!" * Kate Mosse *
"Not only the funniest English novelist who ever wrote but one of our finest stylists" * Susan Hill *

GOR000896166
Carry On, Jeeves: (Jeeves & Wooster) by P. G. Wodehouse
P. G. Wodehouse
Jeeves & Wooster
Used - Very Good
Paperback
Cornerstone
2008-05-01
288
0099513692
9780099513698
N/A
Book picture is for illustrative purposes only, actual binding, cover or edition may vary.
This is a used book - there is no escaping the fact it has been read by someone else and it will show signs of wear and previous use. Overall we expect it to be in very good condition, but if you are not entirely satisfied please get in touch with us.