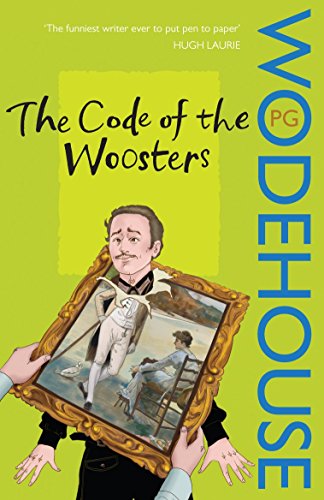 The Code of the Woosters
by P.G. Wodehouse

Used Price
£3.79
New RRP £8.99
Free Shipping in the UK
A Jeeves and Wooster novelWhen Bertie Wooster goes to Totleigh Towers to pour oil on the troubled waters of a lovers' breach between Madeline Bassett and Gussie Fink-Nottle, he isn't expecting to see Aunt Dahlia there - nor to be instructed by her to steal some silver.
Reviews:
Trustpilot
Very Good Good Well Read

The Code of the Woosters Summary

The Code of the Woosters: (Jeeves & Wooster) by P.G. Wodehouse

A Jeeves and Wooster novel When Bertie Wooster goes to Totleigh Towers to pour oil on the troubled waters of a lovers' breach between Madeline Bassett and Gussie Fink-Nottle, he isn't expecting to see Aunt Dahlia there - nor to be instructed by her to steal some silver. But purloining the antique cow creamer from under the baleful nose of Sir Watkyn Bassett is the least of Bertie's tasks. He has to restore true love to both Madeline and Gussie and to the Revd 'Stinker' Pinker and Stiffy Byng - and confound the insane ambitions of would-be Dictator Roderick Spode and his Black Shorts. It's a situation that only Jeeves can unravel. Writing at the very height of his powers, in The Code of the Woosters, P.G. Wodehouse delivers what might be the most delightfully funny book ever committed to paper.

Customer Reviews - The Code of the Woosters

The Code of the Woosters Reviews

"Jeeves, Bertie, Totleigh Towers, Sir Watkyn Bassett, Roderick Spode, Gussie Fink-Nottle, and, of course, the cow-creamer. If you've read it, you'll want to read it again. If you haven't, it's a must. The ultimate holiday indulgence: gloriously funny, blissfully frivolous, overflowing with the joys of summer" -- Dominic Sandbrook * Daily Telegraph *
"Wodehouse was the first to demonstrate that one could float like a butterfly yet sting - as with the poor perisher Spode - like a bee" -- Christopher Hitchens
"It's dangerous to use the word genius to describe a writer, but I'll risk it with him" -- John Humphrys
"For as long as I'm immersed in a P.G. Wodehouse book, it's possible to keep the real world at bay and live in a far, far nicer, funnier one where happy endings are the order of the day" -- Marian Keyes
"Wodehouse always lifts your spirits, no matter how high they happen to be already" -- Lynne Truss

GOR001350592
The Code of the Woosters: (Jeeves & Wooster) by P.G. Wodehouse
P.G. Wodehouse
Jeeves & Wooster
Used - Very Good
Paperback
Cornerstone
2008-05-01
304
0099513757
9780099513759
N/A
Book picture is for illustrative purposes only, actual binding, cover or edition may vary.
This is a used book - there is no escaping the fact it has been read by someone else and it will show signs of wear and previous use. Overall we expect it to be in very good condition, but if you are not entirely satisfied please get in touch with us.