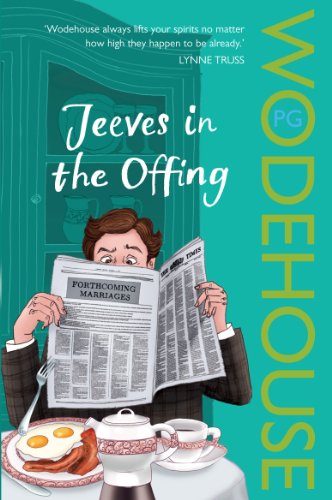 Jeeves in the Offing
by P. G. Wodehouse

In Stock
£5.99
A Jeeves and Wooster novelJeeves is on holiday in Herne Bay, and while he's away the world caves in on Bertie Wooster. And finally the Brinkley butler turns out for reasons of his own to be Bertie's nemesis in disguise, the brain surgeon Sir Roderick Glossop.
Very Good Good
Only 2 left

Jeeves in the Offing Summary

Jeeves in the Offing: (Jeeves & Wooster) by P. G. Wodehouse

A Jeeves and Wooster novel Jeeves is on holiday in Herne Bay, and while he's away the world caves in on Bertie Wooster. For a start, he's astonished to read in The Times of his engagement to the mercurial Bobbie Wickham. Then at Brinkley Court, his Aunt Dahlia's establishment, he finds his awful former head master in attendance ready to award the prizes at Market Snodsbury Grammar School. And finally the Brinkley butler turns out for reasons of his own to be Bertie's nemesis in disguise, the brain surgeon Sir Roderick Glossop. With all occasions informing against him, Bertie has to hightail it to Herne Bay to liberate Jeeves from his shrimping net. And after that, the fun really starts.

Jeeves in the Offing Reviews

GOR001191598
Jeeves in the Offing: (Jeeves & Wooster) by P. G. Wodehouse
P. G. Wodehouse
Jeeves & Wooster
Used - Very Good
Paperback
Cornerstone
2008-01-10
208
0099513943
9780099513940
N/A
Book picture is for illustrative purposes only, actual binding, cover or edition may vary.
This is a used book - there is no escaping the fact it has been read by someone else and it will show signs of wear and previous use. Overall we expect it to be in very good condition, but if you are not entirely satisfied please get in touch with us.