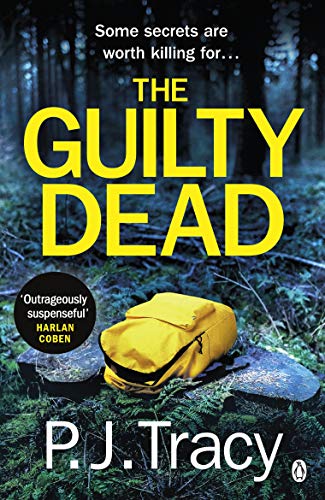 Gregory Norwood, wealthy businessman and close friend of Minnesota's leading candidate for Governor, is found dead on the first anniversary of his son's drug overdose. It seems clear to Detectives Gino and Magozzi that grief drove him to suicide.

Until they realise the left-handed man seems to have used his right hand to pull the trigger.

And they find the second body.

As the seemingly open-and-shut case becomes a murder enquiry, the detectives begin to delve into the dark secrets of one of the city's most powerful families. It seems the murders are not the first in the Norwoods' tragic story - and they won't be the last . . .

'A fast-paced gripping read with thrills and devilish twists' Guardian

'A powerful thriller and an ingenious plot' Observer Review

The Guilty Dead is a cut above. The stakes are higher, and nothing is as it seems. This is Tracy at her gritty, elegant best. Do not miss it. -- JT Ellison, New York Times bestselling author of Lie to Me
In this high-stakes thriller, Tracy demonstrates once again her masterful ability to juggle the dynamics of a tight, fast-paced plot, the riveting details of a fine police procedure, and the compelling emotional complexities of human relationships. There's so much to savor in the writing itself, but I'm sure readers will consume this offering in one quick binge. Another winner in one of the most satisfying series on the market today -- William Kent Krueger, Edgar Award-winning author of Ordinary Grace
Snappy dialogue and supercharged storytelling, with thrills and spills aplenty * Daily Mail *

P. J. Tracy was the pseudonym for the mother-and-daughter writing team of P. J. and Traci Lambrecht. Together P. J. and Traci were authors of the bestselling thrillers Want to Play? (a Richard and Judy Book Club pick), Live Bait, Dead Run, Snow Blind, Play to Kill, Two Evils, Cold Kill and Nothing Stays Buried. P. J. passed away in 2016, but Traci has continued the series with The Guilty Dead and Ice Cold Heart.

GOR009509084
The Guilty Dead by P. J. Tracy
P. J. Tracy
Twin Cities Thriller
Used - Very Good
Paperback
Penguin Books Ltd
2018-11-01
384
1405936029
9781405936026
N/A
Book picture is for illustrative purposes only, actual binding, cover or edition may vary.
This is a used book - there is no escaping the fact it has been read by someone else and it will show signs of wear and previous use. Overall we expect it to be in very good condition, but if you are not entirely satisfied please get in touch with us.