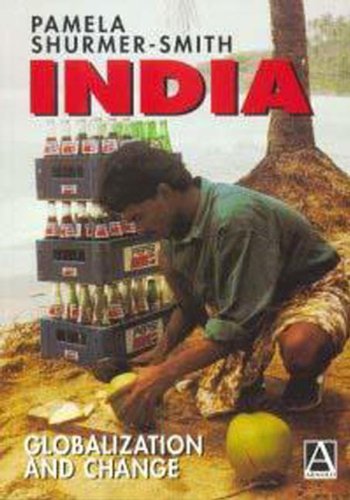 In Stock
£5.99
Assuming no prior knowledge of India, this text assesses the impact of globalization on India and the changes that have taken place at all levels of society since transition in 1991 from state-managed socialism to market-dominated capitalism. The author draws on both Indian and Western research.
Very Good
Only 2 left

At the end of the twentieth century, India has been transformed by global economic forces. 'India: Globalization and Change' examines the political and social changes taking place in India as a result of market liberalisation and integration into the world economy.

Concentrating on the period since the emergence of market-dominated capitalism in India in the early 1990s, this up-to-date book highlights the effects of globalization on nearly all corners of Indian life. Rather than seeking explanation through referring to the past and traditions, this book concentrates on the modernising forces at work in India through an analysis of our major themes: caste, class, religion and gender. The author also considers the widening divisions in Indian society in relation to the overseas influence (through education and work) on elites and the increasing regionalism of other groups.

This book discusses contemporary issues in Indian life (including environmental problems, emigration, and the anti-nuclear movement) and integrates this discussion into an examination of the new structures emerging from an increasing dependence on global markets. By bringing together the many strands that make up India at the dawn of the twenty-first century, the author provides an innovative perspective on this huge and diverse subcontinent.

...this book makes for an interesting read. I would recommend this book - without any reservation whatsoever - for undergraduate courses in social sciences that focus on India.
Contemporary South Asia

The new economic policy
Affluent urbanities
The middle mass
The urban poor and marginalised people
Rural life
Women and men. Old and young
Violence, crime and corruption
Divisions in society
The centre and regional movements
What price the environment?
A steel frame?
India and her diaspora
Glossary.

GOR004664618
India: Globalization and Change by Pamela Shurmer-Smith
Pamela Shurmer-Smith
Used - Very Good
Paperback
Taylor & Francis Ltd
2000-07-28
224
0340705787
9780340705780
N/A
Book picture is for illustrative purposes only, actual binding, cover or edition may vary.
This is a used book - there is no escaping the fact it has been read by someone else and it will show signs of wear and previous use. Overall we expect it to be in very good condition, but if you are not entirely satisfied please get in touch with us.