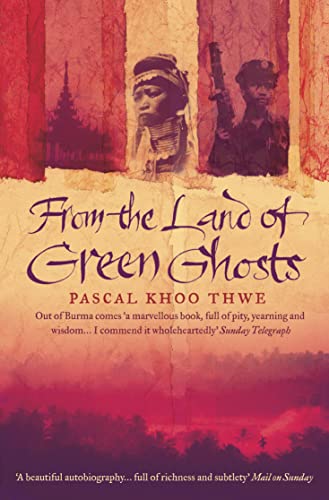 From The Land of Green Ghosts
by Pascal Khoo Thwe

The astonishing story of a young man's upbringing in a remote tribal village in Burma and his journey from his strife-torn country to the tranquil quads of Cambridge.

From The Land of Green Ghosts Summary

From The Land of Green Ghosts: A Burmese Odyssey by Pascal Khoo Thwe

The astonishing story of a young man's upbringing in a remote tribal village in Burma and his journey from his strife-torn country to the tranquil quads of Cambridge.

In lyrical prose, Pascal Khoo Thwe describes his childhood as a member of the Padaung hill tribe, where ancestor worship and communion with spirits blended with the tribe's recent conversion to Christianity. In the 1930s, Pascal's grandfather captured an Italian Jesuit, mistaking him for a giant or a wild beast; the Jesuit in turn converted the tribe. (The Padaung are famous for their `giraffe women' - so-called because their necks are ritually elongated with ornamental copper rings. Pascal's grandmother had been exhibited in a touring circus in England as a `freak'.)

Pascal developed a love of the English language through listening to the BBC World Service, and it was while working as a waiter in Mandalay to pay for his studies that he met the Cambridge don John Casey, who was to prove his saviour. The brutal military regime of Ne Win cracked down on `dissidents' in the late 1980s.

Pascal's girlfriend was raped and murdered by soldiers, and Pascal took to the jungle with a guerrilla army. How he was eventually rescued with Casey's help is a dramatic story, which ends with his admission to Cambridge to study his great love, English literature.

From The Land of Green Ghosts Reviews

`Deserves to become a "Wild Swans" of this new century.' Caroline Moore, Spectator

`More than the record of an astonishing life, this book is a work of art.' Mark Archer, Financial Times

`Exceptional...In parts it is a thrilling and fascinating page-turner. In others, it fills one with respectful awe at the resilience and determination of a young man to fight despair and never lose hope.' Martin Booth, Sunday Times

Pascal Khoo Thwe was born in 1968 in a remote part of Burma. How he developed a passion for English literature (specifically, James Joyce), became involved in the student resistance to savage military repression, escaped to Thailand and won an English degree at Cambridge University is the story of this remarkable book.

GOR001171534
From The Land of Green Ghosts: A Burmese Odyssey by Pascal Khoo Thwe
Pascal Khoo Thwe
Used - Very Good
Paperback
HarperCollins Publishers
2003-03-03
320
0007116829
9780007116829
Winner of Kiriyama Pacific Rim Book Prize - Non-Fiction 2002
Book picture is for illustrative purposes only, actual binding, cover or edition may vary.
This is a used book - there is no escaping the fact it has been read by someone else and it will show signs of wear and previous use. Overall we expect it to be in very good condition, but if you are not entirely satisfied please get in touch with us.