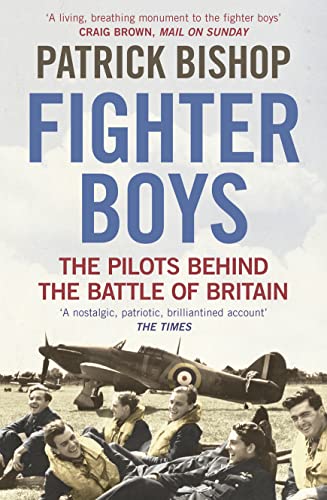 In the summer of 1940, the future of Britain and the free world depended on the morale and skill of the young men of Fighter Command. This is their story.

In the summer of 1940, the future of Britain and the free world depended on the morale and skill of the young men of Fighter Command. This is their story.

The Battle of Britain is one of the most crucial battles ever fought, and the victory of Fighter Command over the Luftwaffe has always been celebrated as a classic feat of arms. But, as Patrick Bishop shows in this superb history, it was also a triumph of the spirit in which the attitudes of the pilots themselves played a crucial part. Reaching beyond the myths to convey the fear and exhilaration of life on this most perilous of frontlines, Patrick Bishop offers an intimate and compelling account that is a soaring tribute to the exceptional young men of Fighter Command.

`I know of no more thoughtful nor yet more moving study of their achievement.' Max Hastings, Sunday Telegraph

`A living, breathing monument to the fighter boys.' Craig Brown, Mail on Sunday

`As a vivid chronicle of who the Battle of Britain pilots were, what motivated them, and why they were ultimately successful, "Fighter Boys" is unsurpassed.' Daily Telegraph

`No one reading this book can possibly doubt the heroism of those involved...there can't be a finer history.' James Holland, New Statesman

Patrick Bishop is the author of the critically acclaimed and best-selling Fighter Boys, Bomber Boys, 3 Para and Ground Truth. Previously, he was a foreign correspondent for over twenty years, reporting from conflicts all over the world.

GOR000344083
Fighter Boys: Saving Britain 1940 by Patrick Bishop
Patrick Bishop
Used - Very Good
Paperback
HarperCollins Publishers
2004-03-29
464
0006532047
9780006532040
N/A
Book picture is for illustrative purposes only, actual binding, cover or edition may vary.
This is a used book - there is no escaping the fact it has been read by someone else and it will show signs of wear and previous use. Overall we expect it to be in very good condition, but if you are not entirely satisfied please get in touch with us.