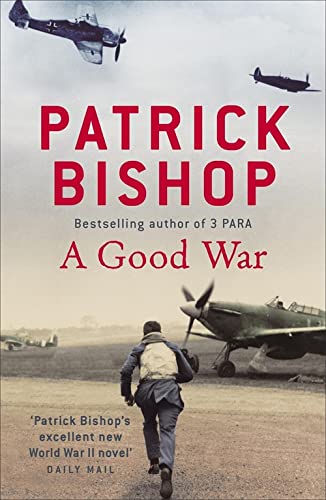 A Good War
by Patrick Bishop

In Stock
£4.49
Superb WW2 thriller from the author of non-fiction bestsellers Fighter Boys, Bomber Boys and 3 Para, coming out in paperback
Very Good
Only 2 left

A Good War by Patrick Bishop

Adam Tomaszewski is a Polish airman, flying Hurricanes alongside British pilots as the Battle of Britain rages in the summer skies over Kent and Sussex. Facing death daily and far from his friends and family, Adam finds himself drawn to a maverick Irish soldier called Gerry Cunningham.

'You're out of luck, brother,' are the first words Gerry says when they meet in the crush of men competing for the few women at a dance in a seaside hotel, but when Gerry betrays his lover Moira, Adam's fortunes seem to have changed. For the next four years, Adam's life and Gerry's are intertwined like good luck and bad, love and loss, life and death, their paths crossing at various points on Adam's perilous journey from the ruins of Poland to the rolling English countryside, from Egypt to Occupied France.

A hauntingly evocative picture of wartime Britain, a twisting drama of fighting behind enemy lines, a compelling, suspenseful love story, A GOOD WAR proves Patrick Bishop - already acclaimed as a great historian of the war in the air - to be a superbly gifted novelist.

Bishop writes an exciting aerial dogfight, rich in the telling detail that makes for authenticity. Yet this is a good deal more than a bloke's yarn, with well-drawn, convincing characters and plenty of what the movie-makers used to call love interest, too. * Daily Mail *
Gripping...powerful descriptions of the air battles and life on a RAF station...equally good at capturing the mood in a rural pub, or a smoky, sweaty ballroom...The final, most thrilling, part of the book takes place in the aftermath of the D-Day landings in 1944...a poignant end to an enthralling tale, and I hope not the last of Bishop's wartime novels * Spectator *
Best known for his fine histories of the RAF in the Second World War, Bishop proves equally adept at historical fiction with this well-crafted and beautifully written debut novel...A compelling read. * Saul David, Independent on Sunday *
'A measured, lyrical novel of remarkable scope and poise, A GOOD WAR is also replete with the realism and authenticity that are the author's hallmark...wonderfully evocative...A GOOD WAR confirms Patrick Bishop as a writer of fiction who has come of age' * Damien Lewis, author of Apache Dawn *
A real feel for the period * Telegraph *
Patrick Bishop turns novelist in this beautifully crafted love story. In its evocation of time and place it rings true at every turn. * Mail on Sunday *
A superb account of the spirit and character of Fighter Command * Independent on Fighter Boys *
One of the most profoundly moving books about the war to have emerged in recent memory * Sunday Telegraph on Bomber Boys *
Superbly written and authoritative * Observer on Bomber Boys *
One of the bravest and best war correspondents alive, Bishop has an instinctive sympathy for his subject * Standard on Bomber Boys *
A terrific book, so riveting, exciting and moving - a true memorial * Spectator on Bomber Boys *
As fine a book as you'll ever read on modern warfare * Telegraph on 3 Para *
The combat and the emotional dramas are charged with tension . . . the writing is strong and assertive and powerfully conveys the atmosphere of living on the edge . . . a fine debut * Historical Novels Review *

Patrick Bishop spent twenty-five years as a foreign correspondent covering conflicts around the world. He is the author of two hugely acclaimed books about the Royal Air Force during the Second World War, Fighter Boys and Bomber Boys. His most recent bestseller is 3 Para, an epic account of the British deployment to Afghanistan in the summer of 2006. A GOOD WAR is his first novel.

GOR000480666
A Good War by Patrick Bishop
Patrick Bishop
Used - Very Good
Paperback
Hodder & Stoughton General Division
2008-11-13
528
0340979003
9780340979006
N/A
Book picture is for illustrative purposes only, actual binding, cover or edition may vary.
This is a used book - there is no escaping the fact it has been read by someone else and it will show signs of wear and previous use. Overall we expect it to be in very good condition, but if you are not entirely satisfied please get in touch with us.