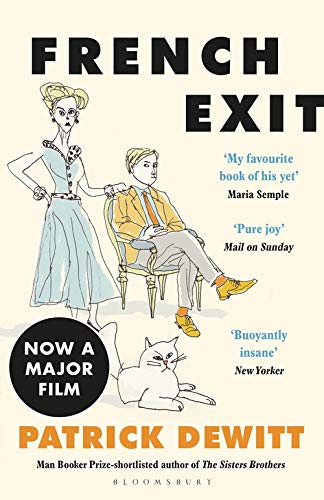 A tragedy of manners from the Man Booker-shortlisted author of The Sisters Brothers `My favourite book of his yet' Maria Semple, author of Where'd You Go, Bernadette 'Pure joy' Mail on Sunday 'Buoyantly insane' New Yorker Frances Price is in dire straits. Scandals swirl around the recently widowed New York socialite, and her adult-aged, toddler-brained son Malcolm is no help. Cutting their losses, they grab their cat, Small Frank, and head for the exit. Paris becomes the backdrop for a giddy drive to self-destruction, helped along by a cast of singularly curious characters. Brimming with pathos, warmth and wit, French Exit is a riotous send-up of high society and a moving story of mothers and sons.

French Exit made me so happy ... Brilliant, addictive, funny and wise -- Andrew Sean Greer, Pulitzer Prize-winning author of 'Less'
Dazzling ... deWitt writes in a gorgeously relaxed, freeform style, dabbing a clause here, a phrase there. The book is studded with tiny pleasures ... Sharp and strange ... DeWitt's particular comic genius is to evoke the darkness behind the dazzle ... Whichever style he adopts or genre he inhabits, deWitt remains a true original * Guardian *
An accomplished comic novel shot through with DeWitt's trademark genre defiance and caustic sense of humour * i *
Pure joy - think Noel Coward shaken up with Ivy Compton-Burnett and garnished with a twist of Lemony Snicket * Mail on Sunday *
DeWitt is in possession of a fresh, lively voice that surprises at every turn -- Kate Atkinson, author of 'Transcription'
My favourite book of his yet. The dialogue is dizzyingly good, the world so weird and fresh. A triumph from a writer truly in the zone -- Maria Semple, author of the bestselling 'Where'd You Go, Bernadette'
Gloriously, acerbically funny and odd -- Melissa Harrison
A sparkling dark comedy ... DeWitt's tone is breezy, droll, and blithely transgressive ... These are people you may not want to invite to dinner, but they sure make for fun reading * NPR *
A thrilling madcap caper anchored by memorable characters, emotional depth and forensically sharp writing -- Hannah Rothschild, author of 'The Improbability of Love'
The first time I read French Exit, I raced through, impatient to know the fates of its characters. Then I turned back to page one to enjoy Patrick deWitt's understated satire and casually brutal wit -- Nell Zink, author of 'Mislaid' and 'The Wallcreeper'
A modern story, a satire about an insouciant widow on a quest for refined self-immolation .... DeWitt's surrealism is cheerful and matter-of-fact, making the novel feel as buoyantly insane as its characters .... DeWitt is a stealth absurdist, with a flair for dressing up rhyme as reason * New Yorker *
DeWitt is a promiscuous writer, flirting and subverting a different genre with each new novel. With French Exit he has served up a wry, souffle-light, European-style comedy ... A diverting oddball tale that treads just the right line between bite and whimsy * Metro *
A Preston Sturges-esque satire on New York's moneyed classes and the casual brutality of their emotional lives, with more than a whiff of The Royal Tenenbaums ... Think Cary Grant's uptight paleontologist trading barbs with Katharine Hepburn's blithe heiress in Bringing Up Baby' * Telegraph *
A breezily enjoyable social comedy ... Frances and Malcolm make for a memorable double act, with Frances in particular zinging out waspish one-liners * The Times *
Patrick deWitt has taken all of what I usually expect and want from a story, misted it in Chanel No 5, and set to it an immeasurably classy lighter. Love it -- Natasha Pulley, bestselling author of 'The Watchmaker of Filigree Street'
Patrick deWitt is an artful ventriloquist: for each of his three novels he has deployed a distinctive and utterly beguiling voice * Metro *
DeWitt is a true original, conjuring up dark and hilarious images * The Times *
DeWittland is a place of exaggerated, creeping horror; a place populated by unfeeling characters who engage in bouts of baroque violence; above all a place suffused with grim humour. It's also a place in which the limits of genre are explored * Daily Telegraph *
Disarmingly funny ... DeWitt can inject so much exposition with a single sentence that the reader seldom feels the need for elaboration ... True to the theatrical form deWitt appears to have been inspired by, French Exit includes multiple layers of meaning and social commentary, wrapped up in a whip-smart package that cracks with wit and wordplay * Quill and Quire *
From the author of the masterpiece of comic taciturnity The Sisters Brothers, French Exit is a "tragedy of manners" delivered with similar devastating wit and brilliance ... Combining Edward St Aubyn levels of social awfulness with a masterclass in understated absurdity, any new deWitt novel should be a cause for a national holiday, this one deserving champagne, fireworks and a marching band besides * Strong Words *
If you liked Where'd You Go, Bernadette? by Maria Semple, you'll love the quirky characters and sharp humour of French Exit * Good Housekeeping *
A highly enjoyable read ... deWitt's style is nothing if not idiosyncratic, and his elevated language - played for particular comic effect when it comes to dialogue - is perfectly suited to affectionately chiding upper-class mores ... The tenderness between Frances, her son and her old friend Joan is of the real stuff * Esquire *
Frances and Malcolm are terrific characters, immediately arresting ... The greatest achievement of French Exit however is the glamorous, formidable Frances; eccentric, highly intelligent, cold-blooded in both personal and business relationships, she's as witty as any Evelyn Waugh mother ... A terrible tale of self-ruin more akin to Gatsby or Patrick Melrose than the Wodehouse or Mitford stories it initially conjures ... Faintly comparable to Waugh's A Handful of Dust * Big Issue *
If you like Paris, cats, dark humour and satire this is the book for you ... With a unique cast of characters and an unusual relationships the book is both witty and warm * Living France *

Patrick deWitt is the author of The Sisters Brothers, which won the Governor General's Award and was shortlisted for the Man Booker Prize and the Walter Scott Prize. He also is the author of Ablutions, which was a New York Times Editor's Choice, and Undermajordomo Minor. The Sisters Brothers is being adapted for film by Jacques Audiard (Rust and Bone, A Prophet), to star Jake Gyllenhaal, Joaquin Phoenix, Riz Ahmed and John C. Reilly, for release in 2018. Born in British Columbia, Canada, deWitt now resides in Portland, Oregon.

GOR009929278
French Exit by Patrick deWitt
Patrick deWitt
Used - Very Good
Paperback
Bloomsbury Publishing PLC
2019-06-13
256
1526601192
9781526601193
N/A
Book picture is for illustrative purposes only, actual binding, cover or edition may vary.
This is a used book - there is no escaping the fact it has been read by someone else and it will show signs of wear and previous use. Overall we expect it to be in very good condition, but if you are not entirely satisfied please get in touch with us.