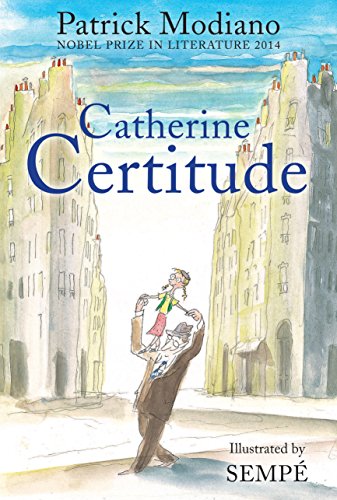 A classic French story from Nobel Prize-winner Patrick Modiano and celebrated illustrator Jean-Jacques Sempe. Beautifully illustrated, this is a love letter to Paris, ballet and childhood for fans of The Little Prince, Le Petit Nicholas and Madeline. Catherine lives with her gentle father, Georges Certitude, who runs a shipping business in Paris with a failed poet named Casterade. Father and daughter share the simple pleasures of daily life: sitting in the church square, walking to school, going to her ballet class every Thursday afternoon. But just why did Georges change his name to Certitude? What kind of trouble with the law did Casterade rescue him from? And why did Catherine's ballerina mother leave to return to New York?

"Elegant. Apparently simple and transparent nostalgia belies its sophistication of observation. Deftly characterised illustrations." * Books for Keeps *
"What particularly engages is the way Modiano captures memories of childhood: fragmented, misunderstood, but glowing in the crucible of recollection" * Booklist *
"Really affecting" * Bookbag *
"Feather-light illustrations. This lovely book suggests the delicacy and strength of an eggshell." * Publishers Weekly online *
"Ravishing artwork. In surrendering our old certitudes, we may win insights that make our lives more fully human and humane in the present." * The Boston Globe *

Patrick Modiano is a celebrated French novelist, author of numerous books for adults and children. His work has been translated into over 30 languages. Notable awards include the Grand Prix du Roman de l'Academie Francaise, the Prix Goncourt and the Austrian State Prize for European Literature. In 2014 he was awarded the Nobel Prize in Literature `for the art of memory with which he has evoked the most ungraspable human destinies.' Born in France in 1932, Jean-Jacques Sempe is one of the world's most successful illustrators and cartoonists. His work includes numerous covers of the New Yorker magazine, full-page cartoons in Paris Match, the illustrations of the classic children's book character, Nicholas, and many albums of cartoons and graphic novels. He lives in Paris.

GOR006737332
Catherine Certitude by Patrick Modiano
Patrick Modiano
Used - Very Good
Hardback
Andersen Press Ltd
2014-12-11
80
1783443022
9781783443024
N/A
Book picture is for illustrative purposes only, actual binding, cover or edition may vary.
This is a used book - there is no escaping the fact it has been read by someone else and it will show signs of wear and previous use. Overall we expect it to be in very good condition, but if you are not entirely satisfied please get in touch with us.