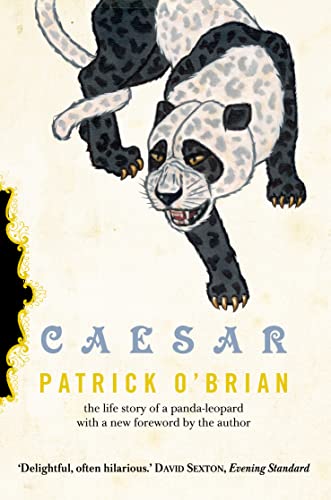 Caesar is a tale of survival, love, and loyalty, by a young O'Brian who was rightly hailed, even at fifteen, as the `boy-Thoreau'. The fascinating career of the literary genius behind Aubrey-Maturin began here.

Caesar is a tale of survival, love, and loyalty, by a young O'Brian who was rightly hailed, even at fifteen, as the `boy-Thoreau'. The fascinating career of the literary genius behind Aubrey-Maturin began here.

`I dimly felt sorry that I had needlessly killed these two useless things, for though I was hungry I could not bring myself to eat these smelly men.'

Written when Patrick O'Brian was just fourteen, this is the enchanting, bloodthirsty story of Caesar - whose father was a giant panda, but his mother a snow leopard. With the dry wit and unsentimental precision O'Brian would come to be loved for, we see the tragedies of Caesar's childhood, his capture and taming, and finally his rise to fatherhood under the iron rule of human masters.

`Full of the fantasy that has made O'Brian's seafaring yarns such a success. Caesar is full of engaging adventures, curious lore, fond descriptions of food and scenes of battle... and delightful, often hilarious reading.'
David Sexton, Evening Standard

`We can see here a true storyteller in the making.'
JULIET TOWNSEND, Literary Review

`A delightful story told in the first person by an unlikely hybrid panda-cum-leopard. Sustained and well-written... ['Ceasar'] highlights the foundations of O'Brian's mastery of writing, his value far beyond that of a historical novelist.'
MARTIN BOOTH, Daily Telegraph

`O'Brian admirers can now appreciate another dimension to his writing'
ALEX O'CONNELL, The Times

GOR004713623
Caesar by Patrick O'Brian
Patrick O'Brian
Used - Very Good
Paperback
HarperCollins Publishers
2001-04-17
112
0006513735
9780006513735
N/A
Book picture is for illustrative purposes only, actual binding, cover or edition may vary.
This is a used book - there is no escaping the fact it has been read by someone else and it will show signs of wear and previous use. Overall we expect it to be in very good condition, but if you are not entirely satisfied please get in touch with us.