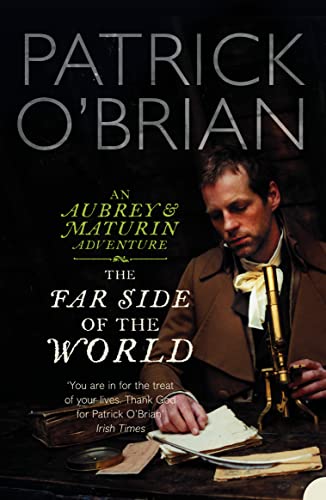 The Far Side of the World
by Patrick O'Brian

Patrick O'Brian's Aubrey-Maturin tales are widely acknowledged to be the greatest series of historical novels ever written. Now these evocative stories are being re-issued in paperback by Harper Perennial with stunning new jackets.

The Far Side of the World Summary

The Far Side of the World by Patrick O'Brian

Patrick O'Brian's Aubrey-Maturin tales are widely acknowledged to be the greatest series of historical novels ever written. Now these evocative stories are being re-issued in paperback by Harper Perennial with stunning new jackets.

It is still the War of 1812. Patrick O'Brian takes his hero Jack Aubrey and his tetchy, sardonic friend Stephen Maturin on a voyage as fascinating as anything he has ever written. They set course across the South Atlantic to intercept a powerful American frigate outward bound to play havoc with the British whaling trade.

If they do not come up with her before she rounds the Horn, they must follow her into the Great South Sea and as far across the Pacific as she may lead them. It is a commission after Jack's own heart. Maturin has fish of his own to fry in the world of secret intelligence.

Aubrey has to cope with a succession of disasters - men overboard, castaways, encounters with savages, storms, typhoons, groundings, shipwrecks, to say nothing of murder and criminal insanity. That the enemy is in fact faithfully dealt with, no one who has the honour of Captain Aubrey's acquaintance can take leave to doubt.

Customer Reviews - The Far Side of the World

The Far Side of the World Reviews

'Full of the energy that comes from a writer having struck a vein...Patrick O'Brian is unquestionably the Homer of the Napoleonic wars.' James Hamilton-Paterson

Patrick O'Brian, until his death in 2000, was one of our greatest contemporary novelists. He is the author of the acclaimed `Aubrey-Maturin' tales and the biographer of Joseph Banks and Picasso. He is the author of many other books including `Testimonies', and his `Collected Short Stories'. In 1995 he was the first recipient of the Heywood Hill Prize for a lifetime's contribution to literature. In the same year he was awarded the CBE. In 1997 he received an honorary doctorate of letters from Trinity College, Dublin. He lived for many years in South West France and he died in Dublin in January 2000.

GOR001505220
The Far Side of the World by Patrick O'Brian
Patrick O'Brian
Used - Very Good
Paperback
HarperCollins Publishers
2007-06-04
400
0007255926
9780007255924
N/A
Book picture is for illustrative purposes only, actual binding, cover or edition may vary.
The book has been read but remains in clean condition. All pages are intact and the cover is intact. Some minor wear to the spine.