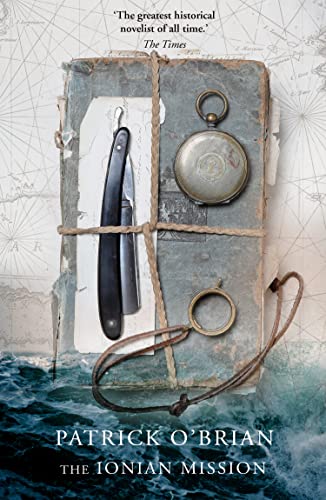 The Ionian Mission
by Patrick O'Brian

Patrick O'Brian's Aubrey-Maturin tales are widely acknowledged to be the greatest series of historical novels ever written. To commemorate the 40th anniversary of their beginning, with Master and Commander, these evocative stories are being re-issued in paperback with smart new livery. This is the eighth book in the series.

The Ionian Mission by Patrick O'Brian

Patrick O'Brian's Aubrey-Maturin tales are widely acknowledged to be the greatest series of historical novels ever written. To commemorate the 40th anniversary of their beginning, with Master and Commander, these evocative stories are being re-issued in paperback with smart new livery. This is the eighth book in the series.

Jack Aubrey and Stephen Maturin, veterans of many battles, return in this novel to the seas where they first sailed as shipmates. But Jack is now a senior Captain commanding a line-of-battle ship sent out to reinforce the squadron blockading Toulon, and this is a longer, harder, colder war than the dashing frigate action of his early days.

A sudden turn of events takes him and Stephen off on a hazardous mission to the Greek islands. All his old skills of seamanship, and his proverbial luck when fighting against odds, come triumphantly into their own. The book ends with as fierce and thrilling an action as any in this magnificent series of novels.

GOR001197751
The Ionian Mission by Patrick O'Brian
Patrick O'Brian
Used - Very Good
Paperback
HarperCollins Publishers
1996-12-16
416
0006499228
9780006499220
Winner of Heywood Hill Literary Prize 1995
Book picture is for illustrative purposes only, actual binding, cover or edition may vary.
This is a used book - there is no escaping the fact it has been read by someone else and it will show signs of wear and previous use. Overall we expect it to be in very good condition, but if you are not entirely satisfied please get in touch with us.