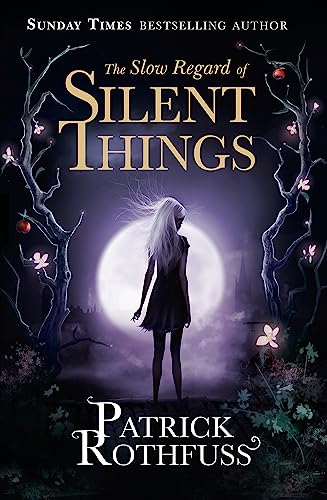 The Slow Regard of Silent Things
by Patrick Rothfuss

Used Price
£4.49
New RRP £8.99
Free Shipping in the UK
This is a stunning new novella in the Kingkiller universe, and a genuine must-read for fans, showing us a little of the world from the perspective of Auri, one of its best-loved characters.
Very Good Good

The Slow Regard of Silent Things Summary

The Slow Regard of Silent Things: A Kingkiller Chronicle Novella by Patrick Rothfuss

The University, a renowned bastion of knowledge, attracts the brightest minds to unravel the mysteries of enlightened sciences like artificing and alchemy. Yet deep below its bustling halls lies a complex and cavernous maze of abandoned rooms and ancient passageways - and in the heart of it all lives Auri.

Formerly a student at the University, now Auri spends her days tending the world around her. She has learned that some mysteries are best left settled and safe. No longer fooled by the sharp rationality so treasured by the University, Auri sees beyond the surface of things, into subtle dangers and hidden names.

At once joyous and haunting, THE SLOW REGARD OF SILENT THINGS is a rich, atmospheric and lyrical tale, featuring one of the most beloved characters from Rothfuss' acclaimed fantasy series.

The Slow Regard of Silent Things Reviews

The writing by Patrick Rothfuss is as exquisite as ever. The number of beautiful metaphors, the authenticity of Auri's voice and the emotions that the story evokes are as strong as we'd expect -- Marc Alpin * Fantasy Faction *
The Slow Regard of Silent Things is a charming, if rather melancholic tale, that leaves the reader feeling rather sad that it has finished * SFF World *
It is wonderfully written, the prose verging on poetic in places...There's a sense that Rothfuss has chosen every one of those words with great care and precision, using them to tell a story that's lyrical, heart-felt and unique * Starburst Magazine *
This book is worth the excitement and frantic scrabbling of pages; it's worth waiting to get to know Auri that little bit better, to step further into her world and see how she survives. Anything Rothfuss-related is a must-read, whether it be an epic novel, a short story or a novella, and The Slow Regard of Silent Things is no exception. * Wondrous Reads *
For those who have read The Name of the Wind and The Wise Man's Fear, this is an absolute must read. * The Bookbag *
an incredibly rewarding read, for an avid reader it's like taking a reading holiday - the differences are a breath of fresh air. * SF Book *
I really loved this story and It made me fall in love with Auri even more....it really is a very special book and It is one I am going to revisit again and again. * Sleepless Musings *

GOR008123689
The Slow Regard of Silent Things: A Kingkiller Chronicle Novella by Patrick Rothfuss
Patrick Rothfuss
Used - Very Good
Paperback
Orion Publishing Co
2015-11-10
176
1473209331
9781473209336
N/A
Book picture is for illustrative purposes only, actual binding, cover or edition may vary.
This is a used book - there is no escaping the fact it has been read by someone else and it will show signs of wear and previous use. Overall we expect it to be in very good condition, but if you are not entirely satisfied please get in touch with us.