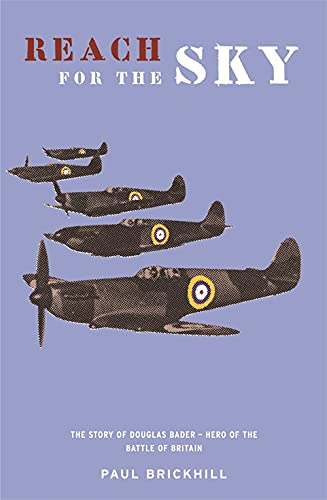 Reach for the Sky
by Paul Brickhill

In Stock
£5.49
The bestselling story of Britain's most courageous and most famous flyer, the Second World War hero Sir Douglas Bader.
Like New Very Good
8 in stock

Reach for the Sky Summary

Reach for the Sky by Paul Brickhill

The bestselling story of Britain's most courageous and most famous flyer, the Second World War hero Sir Douglas Bader.

In 1931, at the age of 21, Douglas Bader was the golden boy of the RAF. Excelling in everything he did he represented the Royal Air Force in aerobatics displays, played rugby for Harlequins, and was tipped to be the next England fly half. But one afternoon in December all his ambitions came to an abrupt end when he crashed his plane doing a particularly difficult and illegal aerobatic trick. His injuries were so bad that surgeons were forced to amputate both his legs to save his life. Douglas Bader did not fly again until the outbreak of the Second World War, when his undoubted skill in the air was enough to convince a desperate air force to give him his own squadron.

The rest of his story is the stuff of legend. Flying Hurricanes in the Battle of Britain he led his squadron to kill after kill, keeping them all going with his unstoppable banter. Shot down in occupied France, his German captors had to confiscate his tin legs in order to stop him trying to escape. Bader faced it all, disability, leadership and capture, with the same charm, charisma and determination that was an inspiration to all around him.

During the war Paul Brickhill was shot down over German territory and sent to a prisoner of war camp. After the war he wrote about the numerous escape attempts in which he was involved in THE GREAT ESCAPE. REACH FOR THE SKY, and THE DAMBUSTERS RAID are his most famous works.

GOR001161865
Reach for the Sky by Paul Brickhill
Paul Brickhill
Cassell Military Paperbacks
Used - Very Good
Paperback
Orion Publishing Co
2000-08-03
384
0304356743
9780304356744
N/A
Book picture is for illustrative purposes only, actual binding, cover or edition may vary.
This is a used book - there is no escaping the fact it has been read by someone else and it will show signs of wear and previous use. Overall we expect it to be in very good condition, but if you are not entirely satisfied please get in touch with us.