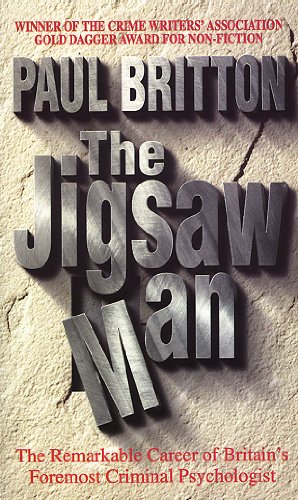 The Jigsaw Man
by Paul Britton

In Stock
£5.49
Forensic psychologist Paul Britton asks himself four questions when he is faced with a crime scene: what happened: who is the victim: how was it done, and why?
Very Good Good Well Read
51 in stock

The Jigsaw Man by Paul Britton

Forensic psychologist Paul Britton asks himself four questions when he is faced with a crime scene: what happened: who is the victim: how was it done, and why? Only when he has the answers to these questions can he address the fifth: who is responsible? An intensely private and unassuming man, Britton has an almost mythic status in the field of crime deduction because of his ability to 'walk through the minds' of those who stalk, abduct, torture, rape and kill other human beings. What he searches for at the scene of a crime are not fingerprints, fibres or blood stains - he looks for the 'mind trace' left behind by those responsible; the psychological characteristics that can help police to identify and understand the nature of the perpetrator. Over the past dozen years he has been at the centre of more than 100 headline-making investigations, from the murder of Jamie Bulger to the abduction of baby Abbie Humphries, the slaying of Rachel Nickell on Wimbledon Common, the pursuit of the Green Chain rapist and the Heinz baby food extortionist, the notorious Gloucester House of Horror and most recently, the murder of Naomi Smith. Told with humanity and insight, The Jigsaw Man is Paul Britton's absorbing first-hand account of those cases, and of his groundbreaking analysis and treatment of the criminal mind. It combines the heart-stopping tension of the best detective thriller with his unique and profound understanding of the dark side of the human condition.

"Riveting... Everyone should read it" -- Frances Fyfield * Observer *
"Nothing short of sudden death will distract you from The Jigsaw Man... it's a triumph to be so interesting without a trace of sensationalism" * Independent *

Paul Britton was born in 1946. Following degrees obtained in psychology from Warwick and Sheffield universities, he has spent the last twenty years working as a consultant clinical and forensic psychologist. He has advised the Association of Chief Police Officers' Crime Committee on offender profiling for many years and currently teaches postgraduates in clinical and forensic psychology. He is married with two children. Paul Britton is the author of Picking Up the Pieces and The Jigsaw Man, which won the Crime Writers' Association Gold Dagger Award for Non-Fiction.

GOR001164745
The Jigsaw Man by Paul Britton
Paul Britton
Used - Very Good
Paperback
Transworld Publishers Ltd
1998-05-15
672
0552144932
9780552144933
Winner of CWA Non-Fiction Gold Dagger 1997
Book picture is for illustrative purposes only, actual binding, cover or edition may vary.
This is a used book - there is no escaping the fact it has been read by someone else and it will show signs of wear and previous use. Overall we expect it to be in very good condition, but if you are not entirely satisfied please get in touch with us.