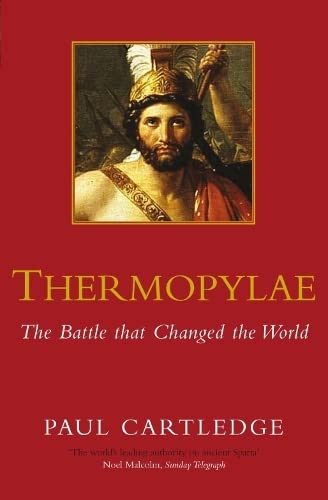 In Stock
£5.99
From the author of the bestselling Alexander the Great and The Spartans comes an epic story of outstanding courage and strength from Classical times.
Very Good Good
Only 2 left

Thermopylae: The Battle that Changed the World by Paul Cartledge

That here, obedient to their laws, we lie'

Thus did the poet Simonides remember the three hundred elite Spartan warriors who, led by their king, Leonidas, faced the vast, inrushing Persian army at the `hot gates' of Thermopylae and fought to the death for an ideal dearer to them than life itself - the ideal of freedom. Paul Cartledge's offers a compelling re-examination of this crucial moment in history, a epic clash of civilizations that helped shape the identity of Classical Greece and our own cultural heritage.

`Our greatest living expert on Sparta tells the story of that fearsome city's finest hour. The result is a book that wonderfully demonstrates the capacity of profound scholarship to thrill, to move and to inspire' Tom Holland, author of Rubicon and Persian Fire

"Impeccable...Enthralling...Vividly reconstructs [the Spartans'] finest hour." -"The Independent" "Briskly written...Offers a fresh look at the battle and the complex events leading up to it."-"Forbes" "In the annals of heroism, the Battle of Thermopylae is an archetype, a classic." -Noel Malcolm, "The Telegraph "(UK) "The real passion of "Thermopylae" lies in the author's sudden discovery that his subject is exciting to other people again." -"The Wall Street Journal"

Paul Cartledge is Professor of Greek History in the Faculty of Classics at the University of Cambridge, where he has taught since 1979; he is also a Fellow of Clare College. His undergraduate and doctoral qualifications where obtained at Oxford, where he completed a dissertation on the archaeology and history of early Sparta under the supervision of Professor Sir John Boardman. He is the author, co-author, editor or co-editor of a score of books, including most recently The Cambridge Illustrated History of Ancient Greece; The Greeks: Crucible of Civilization; Sparta and Lakonia: A Regional History c.1300-362 BC; The Greeks: A Portrait of Self and Others; The Spartans: An Epic History; Alexander the Great: The Hunt for a New Past and Thermopylae: The Battle that Changed the World . He co-edits two monograph series, sits on the editorial boards of three learned journals and serves as consultant in ancient history to Duckworth publishers. He is a Fellow of the Society of Antiquaries of London and holds the Gold Cross of the Order of Honour awarded by the President of the Hellenic Republic.

GOR001049733
Thermopylae: The Battle that Changed the World by Paul Cartledge
Paul Cartledge
Used - Very Good
Paperback
Pan Macmillan
2007-05-18
352
0330419188
9780330419185
N/A
Book picture is for illustrative purposes only, actual binding, cover or edition may vary.
This is a used book - there is no escaping the fact it has been read by someone else and it will show signs of wear and previous use. Overall we expect it to be in very good condition, but if you are not entirely satisfied please get in touch with us.