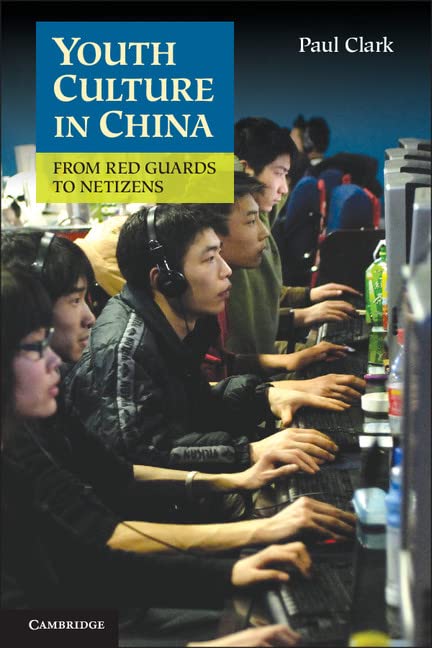 In Stock
£8.99
Paul Clark examines today's youth culture phenomena - centred on music, fashions and distinct spaces (both real and virtual) for the young - and traces their roots to three historical points - 1968, 1988 and 2008. In doing so, he argues that present-day youth culture in China has both international and local roots.
Very Good
Only 1 left

Youth Culture in China: From Red Guards to Netizens by Paul Clark

The lives and aspirations of young Chinese (those between 14 and 26 years old) have been transformed in the past five decades. By examining youth cultures around three historical points - 1968, 1988 and 2008 - this book argues that present-day youth culture in China has both international and local roots. Paul Clark describes how the Red Guards and the sent-down youth of the Cultural Revolution era carved out a space for themselves, asserting their distinctive identities, despite tight political controls. By the late 1980s, Chinese-style rock music, sports and other recreations began to influence the identities of Chinese youth, and in the twenty-first century, the Internet offers a new, broader space for expressing youthful fandom and frustrations. From the 1960s to the present, this book shows how youth culture has been reworked to serve the needs of the young Chinese.

'Employing an interdisciplinary perspective, Paul Clark's impressively researched volume on youth culture in China would be an excellent choice for history, sociology, anthropology or political science classes that incorporate a China component. By taking a forty-year perspective and wisely focusing on the key years of 1968, 1988 and 2008, he is able to trace continuities and contrasts from the Cultural Revolution period down to the present. Examining both academic journals intended for specialists and popular journals intended for the youth themselves, and offering quite detailed accounts of the most important cultural events in the three periods and their larger social influence, Clark has produced a book that will be become a standard and much-cited work in the China studies field.' Stanley Rosen, University of Southern California
'In Youth Culture in China, Paul Clark makes a bold attempt to rethink the Cultural Revolution, by placing it in the wider context of China's emerging youth culture, between the early 1960s and the Olympic year of 2008. The result is an original and provocative book.' Jonathan Spence, author of The Search for Modern China

GOR009971046
Youth Culture in China: From Red Guards to Netizens by Paul Clark
Paul Clark
Used - Very Good
Hardback
Cambridge University Press
2012-05-07
304
1107016517
9781107016514
N/A
Book picture is for illustrative purposes only, actual binding, cover or edition may vary.
This is a used book - there is no escaping the fact it has been read by someone else and it will show signs of wear and previous use. Overall we expect it to be in very good condition, but if you are not entirely satisfied please get in touch with us.