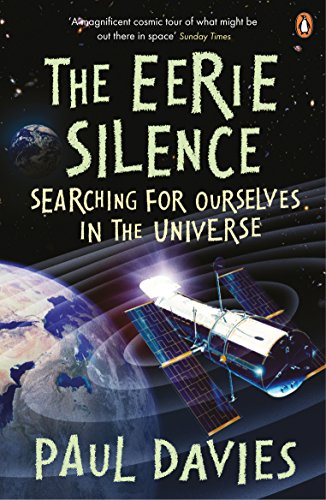 The Eerie Silence
by Paul Davies

In Stock
£4.49
Why isn't the universe teeming with alien life? This book is a guide to the 'Fermi Paradox'.
Very Good Good Well Read
Only 2 left

The Eerie Silence: Searching for Ourselves in the Universe by Paul Davies

Paul Davies' The Eerie Silence: Searching For Ourselves in the Universe is an engaging and lucid guide to the 'Fermi Paradox' - why isn't the universe teeming with alien life?

If aliens ever contact us, it will be the single most significant event in human history. And Paul Davies will be responsible for saying something back.

For fifty years the Search for Extra-Terrestrial Intelligence has been scanning the skies. Now Davies, head of SETI's Post-Detection Task Group, with 'a rare talent for making physics mind-bogglingly vivid and exciting' (Times Higher Education), explores what the mysterious silence it has encountered could mean.

Here he looks at exciting new ways to make contact with extra-terrestrial life. He considers what form advanced alien intelligence is likely to take if it exists. And more importantly, what exactly it would mean if it didn't -- how extraordinary it would be if we were alone, to be human and here in this staggering, eerie silence...

'Conveys excellently the fascination of the quest'
The Times

'An authoritatively written, immensely clear, lay person's guide to the many things we don't know about the rest of the universe'
Guardian

Paul Davies is Director of the BEYOND Center for Fundamental Concepts in Science, and co-Director of the Cosmology Initiative, both at Arizona State University. An internationally-acclaimed physicist, writer and broadcaster, Davies is the author of some twenty award-winning books, including The Eerie Silence: Searching for Ourselves in the Universe, The Goldilocks Enigma: Why is the Universe Just Right for Life? and The Mind of God: Science and the Search for Ultimate Meaning.

In an area more given to fabulation than fact, [Paul Davies'] level-headedness is positively refreshing. If you ever start worrying about why no one is talking to us, this is the book to calm you down -- David Papineau * Observer *
Davies is the most engaging of writers -- Clive Cookson * FT *
An immensely readable investigation of the SETI enterprise -- Michael Hanlon * New Scientist *
A magnificent cosmic tour d'horizon of what we know, and what we might yet encounter out there, in the apparent emptiness of deep space -- Christoper Hart * Sunday Times *

Paul Davies has achieved an international reputation for his ability to explain the significance of advanced scientific ideas in simple language. He is the author of some twenty books and has written and presented a number of TV and radio programmes. He has also won the prestigious Templeton Prize, the world's largest award for intellectual endeavour, and a Glaxo Science Writers' Fellowship. He is currently Professor at Arizona State University as well as the Director of BEYOND: Center for Fundamental Concepts in Science.

GOR002815059
The Eerie Silence: Searching for Ourselves in the Universe by Paul Davies
Paul Davies
Used - Very Good
Paperback
Penguin Books Ltd
2011-03-03
256
0141037784
9780141037783
N/A
Book picture is for illustrative purposes only, actual binding, cover or edition may vary.
This is a used book - there is no escaping the fact it has been read by someone else and it will show signs of wear and previous use. Overall we expect it to be in very good condition, but if you are not entirely satisfied please get in touch with us.