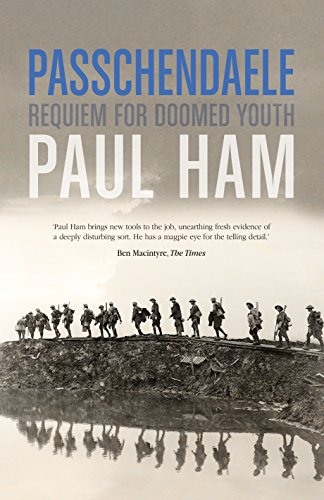 In Stock
£4.99
Through an examination of the culpability of governments and military commanders in a catastrophe that destroyed the best part of a generation, Paul Ham argues that Passchendaele, far from being a breakthrough moment, was the battle that nearly lost the Allies the war.
Very Good
7 in stock

Passchendaele: The Battle that nearly lost the Allies the War by Paul Ham

'Outstanding . . . thought-provoking, readable and informative' Soldier One hundred years on... On 18 July 1917, a heavy artillery barrage was unleashed by the Allied forces against an entrenched German army outside the town of Ypres. it was to be the opening salvo of one of the most ferociously fought and debilitating encounters of the First World War. Few battles would encapsulate the utter futility of the war better that what became known as the Battle of Passchendaele. By the time the British and Canadian forces finally captured Passchendaele village on 6 November, the Allies had suffered over 271,000 casualties and the German army over 217,000. Passchendaele: Requiem for Doomed Youth shows how ordinary men on both sides endured this constant state of siege, with a very real awareness that they were being gradually, deliberately felled. Here, Paul Ham tells the story of an army caught in the grip of an extraordinary power struggle - both global and national. As Prime Minister Lloyd George and Commander Haig's relationship deteriorated beyond repair, so a terrible battle of attrition was needlessly and painfully prolonged. Ham lays down a powerful challenge to the ways in which we have previously seen this monumental battle. Through an examination of the culpability of governments and military commanders in a catastrophe that destroyed the best part of a generation, Paul Ham argues that Passchendaele, far from being a breakthrough moment, was the battle that nearly lost the Allies the war. `Paul Ham brings new tools to the job, unearthing fresh evidence of a deeply disturbing sort. He has a magpie eye for the telling detail.' Ben Macintyre, The Times

"Excellent" * Spectator *
"Outstanding . . . thought-provoking, readable and informative" * Soldier *
"In this centenary study, Australian military historian Paul Ham gives the strategic and political background to the battle. Which he sees as the defining tragedy in the greater disaster of the First World War" * BBC History Magazine *

Paul Ham is the author of the critically acclaimed Sandakan, Hiroshima Nagasaki, Vietnam: The Australian War, Kokoda and 1914: The Year the World Ended. A former correspondent for the Sunday Times (between 1998-2012), Paul was born in Sydney and educated in Australia and Britain, where he completed a Masters degree in Economic History at the London School of Economics and Political Science. He now writes history full-time, and lives in Sydney and Paris.

GOR008238089
Passchendaele: The Battle that nearly lost the Allies the War by Paul Ham
Paul Ham
Used - Very Good
Hardback
Transworld Publishers Ltd
2017-05-04
592
0857525298
9780857525291
N/A
Book picture is for illustrative purposes only, actual binding, cover or edition may vary.
This is a used book - there is no escaping the fact it has been read by someone else and it will show signs of wear and previous use. Overall we expect it to be in very good condition, but if you are not entirely satisfied please get in touch with us.