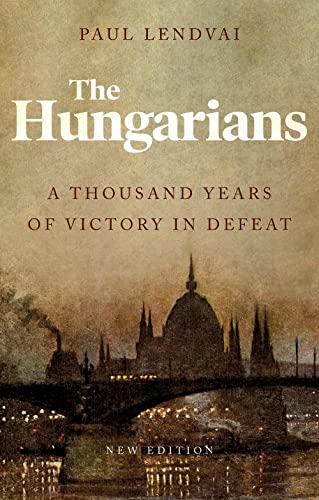 The Hungarians by Paul Lendvai

The Hungarians: A Thousand Years of Victory in Defeat by Paul Lendvai

This is a comprehensive history of a legendarily proud and passionate but lonely people. Much of Europe once knew them as 'child-devouring cannibals' and 'bloodthirsty Huns', but it was not long before the Hungarians became steadfast defenders of Christendom and fought heroic freedom struggles against the Tartars, the Turks and, among others, the Russians. Paul Lendvai tells how, despite a string of catastrophes and their linguistic and cultural isolation, the Hungarians have survived as a nation-state for more than 1,000 years. He traces Hungarian politics, culture, economics and emotions, from the Magyars' dramatic entry into the Carpathian Basin in 896 to the brink of the post-Cold War era. Lendvai brings to life the short-lived revolutionary triumphs of 1848-9 and 1918-19; the traumatic Treaty of Trianon (1920) which deprived Hungary of Transylvania and other historic Magyar lands; and the successive Nazi and Communist tyrannies. These are among the episodes that have formed the consciousness of the Hungarian people. Through anecdotes of heroes and traitors, victors and victims, geniuses and impostors, Lendvai conveys the multifaceted interplay of progressivism and economic modernisation, versus intolerance and narrow-minded nationalism, on the grand stage of Hungarian history. This work is a blend of narrative, irony and humour; of occasional anger without taboos or prejudices. It also offers an authoritative key to understanding how and why this corner of Europe has produced such a galaxy of great scientists, artists and entrepreneurs.
The writing of national histories is. . .justified by the erudition and intellectual brilliance of the [author]. To this one must add, as a special attraction, the charm, wit and healthy cynicism of The Hungarians.' * Times Literary Supplement *
'Glorious, immensely readable' * The Economist *
'A pleasure to read. . . . Mr. Lendvai has done a remarkable job. His book is easily the best history of Hungary in English. . . . What's remarkable is how many extraordinary individuals, admirable and otherwise, we come across in this small nation's history.' -- Stephen Goode * Washington Times *
'When Paul Lendvai, the indefatigable observer of Eastern Europe, writes a book, he usually has something exciting to relate. This book is a well-constructed mixture of historical facts, political judgements, and cultural anecdotes.' * Der Spiegel *
'Researched and constructed in a masterly fashion, this should become a standard work on Hungary. . .It reads almost like a historical novel. . .warmly recommended.' * Die Presse *
'This brief narrative of Hungarian history, elegantly translated into English, is written with verve, profound insights, and just the right degree of cynicism. It well explains the dilemma of a respectable old state squeezed between more powerful neighbours, the contradiction between individual genius and repeated national failure, and the recurring tragic conflict between the defense of nationhood and messianic nationalism.' -- Istvan Deak, Seth Low Professor Emeritus of History, Columbia University
'[R]ewarding, entertaining, and well written. . . . [F]ar more substantial than the witty musings to be found, for example, in Luigi Barzini's 'The Italians'. . . . No one who is interested in Hungary should miss reading this book.' -- Nicolas Parsons * Hungarian Quarterly *
'An outstanding storyteller. [Lendvai] not only presents scientifically based facts and analysis but also tells the reader a story. . .. A compact overview of Hungarian history, a wonderful collection of biographical sketches and a subtle description of the 'Hungarian temperament'.' * Neue Zurcher Zeitung *
'An exhaustive history of the Hungarian people. . . . The author has written a sympathetic account of Hungarian history. Yet the book also exposes the blemishes along with the heroism. . . . For those interested in the history of an art of Europe that has been shrouded in mystery and cliche, it's a helpful handbook.' -- Anne Gyulai * The Montreal Gazette *
'Paul Lendvai is a sharp-eyed observer of the world around him.'
Paul Lendvai is a Hungarian-born Austrian journalist who worked as a correspondent for the Financial Times for more than two decades. He is the author of 'Hungary: Between Democracy and Authoritarianism'; 'Inside Austria: New Challenges, Old Demons'; and 'Blacklisted: A Journalist's Life in Central Europe'.
NGR9781787383364
9781787383364
1787383369
The Hungarians: A Thousand Years of Victory in Defeat by Paul Lendvai
Paul Lendvai
New
Paperback
C Hurst & Co Publishers Ltd
2021-01-21
632
N/A
Book picture is for illustrative purposes only, actual binding, cover or edition may vary.
This is a new book - be the first to read this copy. With untouched pages and a perfect binding, your brand new copy is ready to be opened for the first time
Trustpilot