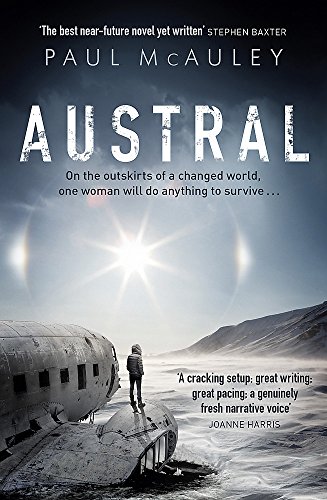 The great geoengineering projects have failed.
The world is still warming, sea levels are still rising, and the Antarctic Peninsula is home to Earth's newest nation, with life quickened by ecopoets spreading across valleys and fjords exposed by the retreat of the ice.
Austral Morales Ferrado, a child of the last generation of ecopoets, is a husky: an edited person adapted to the unforgiving climate of the far south, feared and despised by most of its population. She's been a convict, a corrections officer in a labour camp, and consort to a criminal, and now, out of desperation, she has committed the kidnapping of the century. But before she can collect the ransom and make a new life elsewhere, she must find a place of safety amongst the peninsula's forests and icy plateaus, and evade a criminal gang that has its own plans for the teenage girl she's taken hostage.
Blending the story of Austral's flight with the fractured history of her family and its role in the colonisation of Antarctica, Austral is a vivid portrayal of a treacherous new world created by climate change, and shaped by the betrayals and mistakes of the past.

'Paul McAuley's balanced grasp of science and literature, always a rare attribute in the writer of prose fiction, is combined with the equally rare ability to look at today's problems and know which are really problems, and what can be done about them.' William Gibson

A thrilling chase-cum-travelogue through a beautifully depicted Antarctic wonderland... an impressively vast story in a short punchy novel. * GUARDIAN *
It is one of the best post-climate change novels yet written - and one of McAuley's best books. * SFX MAGAZINE *
A chase thriller set in late 21st-century Antarctica that combines elements of Jack London,J.G. Ballard and William Gibson. A significant contribution to writing about the anthropocene. * THE ECONOMIST *
McAuley is a nature poet of imaginary lands . * LOCUS *
A haunting and engaging piece of science fiction that is every bit as good a piece of writing as the best literary fiction. * POPULAR SCIENCE *
Austral combines a solid science scenario with a taught thriller in an all too plausible future. For an SF reader, or indeed any reader that considers matters beyond the day after tomorrow, what is there not to like? * CONCATENATION *
Austral is a beautifully written novel, which portrays in stark and stunning terms the new frontier of Antarctica. * FOR WINTERS NIGHTS *
Deeply sad and tender. * James Bradley, author of Clade *

Cli-fi transcendent.
An exquisite human story set on an undiscovered continent of our near future.
Austral may be McAuley's best yet. And the best near-future novel yet written.
Paul McAuley has quickened science fiction. The future has changed.

* Stephen Baxter *
The excitement of a new country appearing right here on Earth, a real possibility that is quite fascinating in itself, is doubled down here by way of a thrilling kidnap-and-rescue plot that ranges across this beautiful new landscape, showing how we will soon be not only terraforming Earth, but finding new ways to take care of each other. It's a vivid example of science fiction at its best. -- Kim Stanley Robinson, author of RED MARS
Oh boy, it's a good one. A cracking setup; great writing; great pacing; a genuinely fresh narrative voice, and for once - hooray! - a male author writing a complex, first-person female narrator who is neither a broflake's wet-dream, nor a wooden stereotype. Austral is big, strong, powerful, and yet with real vulnerabilities; a flawed and relatable heroine with agency, feelings and spirit. And to cap it all, Austral is fat - genetically edited to be fat in a way that enhances her strength and endurance, and in the context of her race, is only ever mentioned as a positive. Halleluia. It can be done. -- Joanne Harris, author of THE GOSPEL OF LOKI
Bleakly beautiful, Austral is both a finely-honed character study and a powerful evocation of landscape and change, delivered with icy clarity. This is the kind of fiction we will need as the Anthropocene takes hold. -- Alastair Reynolds
A beautifully worked tale of post-environment collapse Antarctica, and a genetically-tweaked cold-adapted woman's attempt to escape. As ever McAuley writes superbly: his prose is always elegant without being showy, expressive and clear without ever being pedestrian. And he's capable of gorgeous descriptive vividness. Plus: rounded characterisation and a tremendous command of tension and pace . . . There's something deceptively simple about Austral: you read it quickly, and it lives in your head for a long time after. * Adam Roberts *

Paul McAuley won the PHILIP K. DICK AWARD for his first novel and has gone on to win the ARTHUR C. CLARKE, SIDEWISE, BRITISH FANTASY and JOHN W. CAMPBELL AWARDs. He gave up his position as a research biologist to write full time. He lives in London.

GOR008690380
Austral by Paul McAuley
Paul McAuley
Used - Very Good
Paperback
Orion Publishing Co
2017-10-19
288
1473217318
9781473217317
N/A
Book picture is for illustrative purposes only, actual binding, cover or edition may vary.
This is a used book - there is no escaping the fact it has been read by someone else and it will show signs of wear and previous use. Overall we expect it to be in very good condition, but if you are not entirely satisfied please get in touch with us.