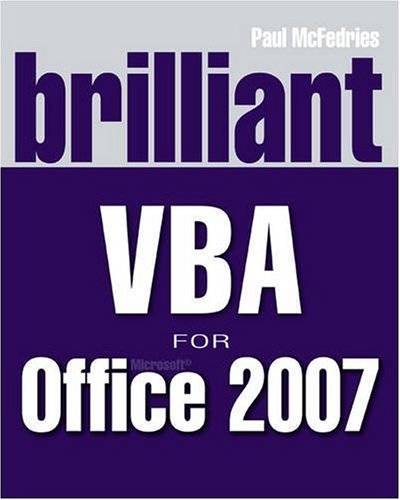 Brilliant VBA for Office 2007 shows you how to take full advantage of the 2007 Microsoft Office suite by automating routine Office tasks. No matter which Office application you're using, there are some tasks you perform dozens of times, such as typing a section of text, running a series of menu commands, or formatting a document in a particular way.This book shows you how to accomplish the same tasks by incorporating them into a macro that you can run with just a few mouse clicks or keystrokes. This book shows you the basics of VBA programming from the ground up. Even if you've never programmed before, Brilliant VBA for Office 2007 will have you up to speed with VBA in no time.You'll learn how to write programs that control Word, Excel, PowerPoint, Access databases, and even Outlook email.You get dozens of example macros that not only illustrate the concepts in the book but also provide you with practical, business-oriented tools that you can use right away to improve your productivity.

Paul McFedries is well-known as a teacher of Windows and Office, particularly Excel, and is the president of Logophilia Limited, a technical writing company. Paul has been working with spreadsheets for more than 20 years and has been developing Excel solutions since the late 1980s. Now primarily a writer, Paul has written more than 50 books that have sold more than three million copies worldwide. These books include Microsoft Office Access 2007 Forms, Reports, and Queries; Tricks of the Microsoft Office 2007 Gurus (all from Que); and Microsoft Windows Vista Unleashed (Sams).

I Getting Started with VBA

2 Writing Your Own Macros

III Getting the Most Out of VBA

GOR009953317
Brilliant VBA for Microsoft Office 2007 by Paul McFedries
Paul McFedries
Used - Well Read
Paperback
Pearson Education Limited
2008-05-22
432
0273715747
9780273715740
N/A
Book picture is for illustrative purposes only, actual binding, cover or edition may vary.
This is a used book. We do our best to provide good quality books for you to read, but there is no escaping the fact that it has been owned and read by someone else previously. Therefore it will show signs of wear and may be an ex library book.