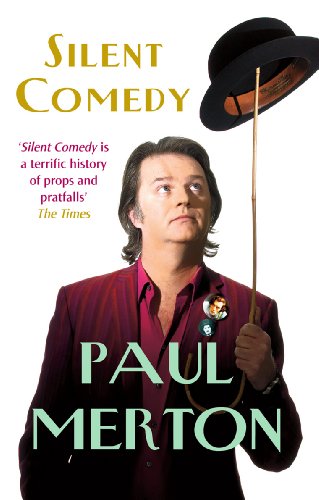 In Stock
£4.49
On the surface it may seem slightly surprising that a master of verbal humour should also be a devotee of silent comedy, but Paul Merton is completely passionate about the early days of Hollywood comedy and the comic geniuses who dominated it.
Very Good Good
Only 1 left

On the surface it may seem slightly surprising that a master of verbal humour should also be a devotee of silent comedy, but Paul Merton is completely passionate about the early days of Hollywood comedy and the comic geniuses who dominated it. His knowledge is awesome - as anyone who watched his BBC 4 series Silent Clowns or attended the events he has staged nationwide will agree - his enthusiasm is infectious, and these qualities are to be found in abundance in his book. Starting with the very earliest pioneering short films, he traces the evolution of silent comedy through the 1900s and considers the works of the genre's greatest exponents - Buster Keaton, Charlie Chaplin, Laurel and Hardy and Harold Lloyd - showing not only how each developed in the course of their career but also the extent to which they influenced each other. At the same time, Paul brings a comedian's insight to bear on the art of making people laugh, and explores just how the great comic ideas, routines, gags and pratfalls worked and evolved. His first book for ten years, this is destined to be a classic.

"Silent Comedy is a terrific history of props and pratfalls...I'm a better person for having read this" * The Times *
"***** Such is Merton's enthusiasm that his story grips throughout." * Mail on Sunday *
"An awestruck and knowledgeable introduction to Hollywood's earliest funsters...lovingly researched" * Daily Telegraph *
"Penned with genuine passion...both well crafted and carefully researched" * Film Review *
"He makes some striking biographical connections the rest of us have missed ... he certainly knows his subject." -- Kevin Brownlow * Spectator *

Paul Merton was born in 1957, long before such things were fashionable. He spent his first eight years living within cheering distance of Fulham Football ground at Craven Cottage although he can't remember any cheering. Upon leaving school with two ropey A Levels and a CSE Grade 5 Maths, Paul enlisted in the Civil Service where he survived for two and a half years. He made his stand-up debut at London's Comedy Store in 1982 where his policeman on acid routine regularly stopped the show. In 1985 he joined the Comedy Store Players, an improvised comedy group which led, in 1988, to him appearing on Whose Line is it Anyway? for the first few series before he couldn't stick it anymore. He has appeared on Have I Got News For You as a team captain since 1990 and is also proud of his other long running gig, Radio 4's Just a Minute. Other TV highlights include his eponymous surreal sketch series from 1991-3; interviewing Spike Milligan in what was to be his last major television appearance as host of Room 101; and making several programmes about early cinema, including The Birth Of Hollywood which he co-wrote with his wife, Suki Webster. He still performs with the Comedy Stores Players every Sunday.

GOR002779985
Silent Comedy by Paul Merton
Paul Merton
Used - Very Good
Paperback
Cornerstone
2009-05-07
384
0099510138
9780099510130
N/A
Book picture is for illustrative purposes only, actual binding, cover or edition may vary.
This is a used book - there is no escaping the fact it has been read by someone else and it will show signs of wear and previous use. Overall we expect it to be in very good condition, but if you are not entirely satisfied please get in touch with us.