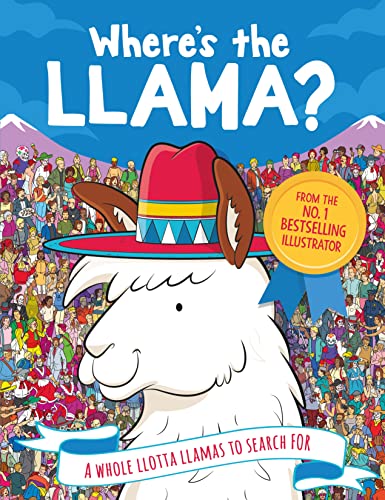 Where's the Llama?
by Paul Moran

New Price
£6.99
Free Shipping in the UK
Word has reached the Andes that llamas are about to become the next big animal sensation. Intrigued, an intrepid herd have decided to 'alpaca' their bags and embark on an incredible round-the-world adventure to meet their adoring fans.
Reviews:
Trustpilot
New£6.99

Where's the Llama?: A Whole Llotta Llamas to Search and Find by Paul Moran

FROM THE PUBLISHERS OF THE BESTSELLING WHERE'S THE UNICORN?, GET READY FOR A WHOLE LLOTTA LLAMA DRAMA!

Word has reached the Andes that everyone's going bananas over llamas! Intrigued, an intrepid herd of fun-loving llamas have decided to 'alpaca' their bags and embark on an incredible round-the-world adventure to meet their adoring llama fans.

Join head llama Beatriz and her hilarious herd - including rock-n-roll Ricardo, fashion-mad Daphne and cute cria Hector - as they travel to all kinds of incredible places. From a Chinese ice festival and a Mexican carnival to a hip street market and all the way home to llama land, there are 17 intricately illustrated scenes to search and ten terrific llamas to find in every location. The answer pages at the back of the book feature extra things to spot and each scene is teeming with laugh-out-loud llama references - from inflatable llamas at the beach to llama masterpieces in a modern art gallery.

Illustrated by the bestselling artist behind Where's the Unicorn? and Where's the Meerkat?, this 'llama-zing' search-and-find book is a must-have gift for llama lovers everywhere!

Paul Moran (Author)
Paul Moran is a UK-based illustrator who has many years of experience in producing artwork for books, magazines and toys using both digital and traditional techniques.

He is the illustrator of the Sunday Times Bestseller Where's the Unicorn?, along with other highly successful Michael O'Mara titles such as Where's the Meerkat?, Where's the Zombie? and Where's the Llama?

Gergely Forizs (Author)
Gergely Forizs is a Hungarian graphic artist represented by Beehive Illustration Agency. After graduating as an art teacher and working as a commercial graphic designer, he turned to a career in children's illustration. He has a passion for comics and history, and incorporates this and a clear, easy-to-understand visual style into his work.

John Batten (Author)
John Batten is based in London and has been illustrating since 1986. He has worked for numerous editorial clients, including The Financial Times, The Independent, The Guardian, Radio Times, The Times Educational Supplement and Prospect magazine. His work covers a wide range of styles and he specializes in educational publishing and ELT. When not illustrating, he enjoys playing guitar in his successful covers band, The Hit Men UK.

Adam Linley (Author)
Adam Linley studied design and illustration at Newcastle and has also trained as a teacher. Before becoming a freelance illustrator, he spent many years as a graphic designer in the greetings industry, working on everything from signage and packaging to cuddly toys and cards. Since then, his illustrations for books have been published all over the world.

Jorge Santillan (Author)
Jorge Santillan is an illustrator based in Mendoza, at the foot of the Andes in Argentina. He has been creating illustrations for over 20 years and his work has appeared in educational books, video games, children's magazines, newspapers and adverts. He is represented by Beehive illustration agency.