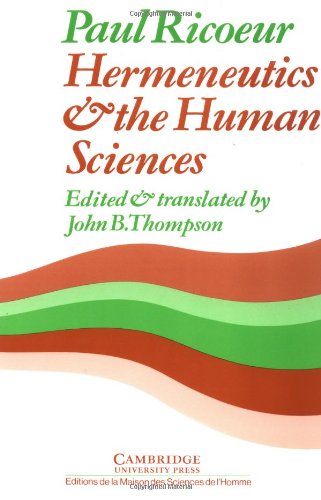 Hermeneutics and the Human Sciences
by Paul Ricoeur

In Stock
£7.49
This is a collection in translation of essays by Paul Ricoeur which presents a comprehensive view of his philosophical hermeneutics, its relation to the views of his predecessors in the tradition and its consequences for the social sciences.
Good
Only 1 left

Hermeneutics and the Human Sciences Summary

Hermeneutics and the Human Sciences: Essays on Language, Action and Interpretation by Paul Ricoeur

This is a collection in translation of essays by Paul Ricoeur which presents a comprehensive view of his philosophical hermeneutics, its relation to the views of his predecessors in the tradition and its consequences for the social sciences. The volume has three parts. The studies in the first part examine the history of hermeneutics, its central themes and the outstanding issues it has to confront. In Part II, Ricoeur's own current, constructive position is developed. A concept of the text is formulated as the implications of the theory are pursued into the domains of sociology, psychoanalysis and history. Many of the essays appear here in English for the first time; the editor's introduction brings out their background in Ricoeur's thought and the continuity of his concerns. The volume will be of great importance for those interested in hermeneutics and Ricoeur's contribution to it, and will demonstrate how much his approach offers to a number of disciplines.

Hermeneutics and the Human Sciences Reviews

'The essays which John Thompson has assembled under the title Hermeneutics and the Human Sciences are all taken from Ricoeur's recent work ... The essays have been chosen with care, and the volume has the benefit of an extensive introduction by its editor. It offers a comprehensive and integrated conspectus of Ricoeur's ideas ... I do not think that anyone would fail to find illumination and challenge in reading him.' Anthony Giddens, The Times Literary Supplement
'Paul Ricoeur is the most important living representative of phenomenology in France. A prolific writer, his work has exerted considerable influence in several areas of philosophy, including the philosophy of religion, the study of symbolism, of metaphor and language ... Hermeneutics and the Human Sciences provides an excellent introduction to Ricoeur's work, which, by focusing on his more recent writings, will serve to inject his themes and perspectives into the mainstream of inquiry in sociological theory.' The Times Higher Education Supplement
'John B. Thompson's lucid and helpful introduction to this collection of essays includes a brief history of Ricoeur's career and the thematic focuses of his major works : This selection of essays makes available in one piece Ricoeur's attempt in the seventies to address the challenges from various intellectual fronts. These confrontations do not present an eclecticism, but rather, constitute a continuous, ongoing, and open intellectual response, addressing not only real philosophical issues dealing especially with interpretation, but issues relevant to the social sciences, psychology, psychoanalysis, theology, and many more disciplines.' Review of Metaphysics

GOR005003881
Hermeneutics and the Human Sciences: Essays on Language, Action and Interpretation by Paul Ricoeur
Paul Ricoeur
Used - Good
Paperback
Cambridge University Press
1981-08-31
324
0521280028
9780521280020
N/A
Book picture is for illustrative purposes only, actual binding, cover or edition may vary.
The book has been read but remains in clean condition. All pages are intact and the cover is intact. Some minor wear to the spine.