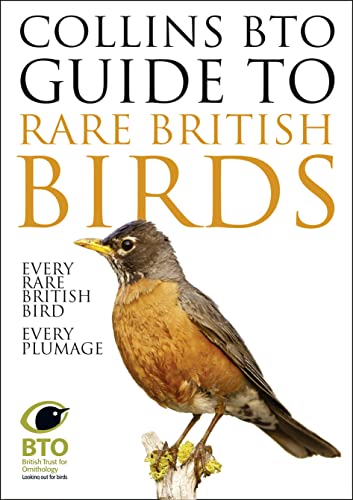 In a unique new collaboration, Collins have paired up with the respected British Trust for Ornithology, bringing together the most authoritative and up-to-date information in this new field guide to the rare birds of Britain and Ireland.

In a unique new collaboration, Collins have paired up with the respected British Trust for Ornithology, bringing together the most authoritative and up-to-date information in this new field guide to the rare birds of Britain and Ireland.

This book is the companion volume to the Collins BTO Guide to British Birds. It covers all the rare and scarce birds that have occurred in Britain and Ireland four times or more, as of February 2015. `The Rarest of the Rare' section lists all the species that have occurred fewer than four times; taken in combination, this means that every species of wild bird that has ever occurred in Britain is mentioned.

Species descriptions comprise the bulk of the book, and the text and photographs describe and illustrate the key features needed to identify these birds with confidence. Confusion species are included, as are vocalisation details for species whose identification it aids.

The photographs have been chosen carefully to show key features that are described in the accompanying text; they also give clues to the usual habitat favoured by the bird and its typical posture. Many of the photographs are seen here for the first time.

`ID Key Feature' pages provide a quick guide to a group of species or families; they describe the structural and behavioural features that an observer should concentrate on initially when they come across an unfamiliar bird. Where relevant, these feature pages also highlight identification pitfalls.

Unlike its companion volume, distribution maps are not included, as they are of little relevance when dealing with rare and scarce birds in Britain and Ireland: by their very nature, vagrant birds can turn up almost anywhere. However, where a part of Britain or Ireland is noteworthy for the occurrence of a given species, then the region in question is mentioned in the text.

`Whether you are a keen amateur or someone with a passing interest, this book will satisfy your needs.' The Sea

`A bookshelf essential' The Field

Paul Sterry has written and illustrated more than 50 books, including the bestselling Collins Complete Guide to British Wildlife (which has sold over half a million copies) and Collins Complete Guide to British Birds. Trained as a zoologist, Paul has been a wildlife photographer for over 30 years and owns the photo library Nature Photographers. He has worked as a Research Fellow at Sussex University studying freshwater ecology and regularly undertakes research expeditions. He is a keen birder and conservationist.

GOR008225992
Collins BTO Guide to Rare British Birds by Paul Sterry
Paul Sterry
Used - Like New
Paperback
HarperCollins Publishers
2015-09-21
288
0007551568
9780007551569
N/A
Book picture is for illustrative purposes only, actual binding, cover or edition may vary.
The book has been read, but looks new. The book cover has no visible wear, and the dust jacket is included if applicable. No missing or damaged pages, no tears, possible very minimal creasing, no underlining or highlighting of text, and no writing in the margins.