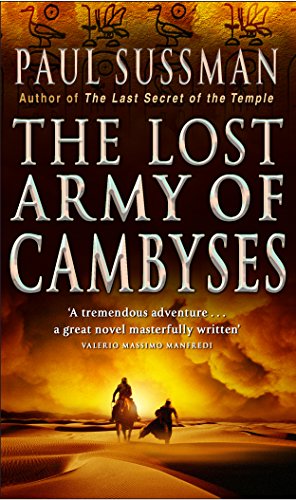 The Lost Army Of Cambyses
by Paul Sussman

In Stock
£6.49
It is a path that will eventually lead them into the forbidding, barren heart of the western desert, and the answer to one of the greatest mysteries of the ancient world .
Like New Very Good Good
Only 2 left

The Lost Army Of Cambyses Summary

The Lost Army Of Cambyses by Paul Sussman

A pulse-pounding archaeological thriller that's a must-read for all fans of Dan Brown and Clive Cussler. In 523 BC, the Persian emperor Cambyses dispatched an army across Egypt's western desert to destroy the oracle of Amun at Siwa. Legend has it that somewhere in the middle of the Great Sand Sea his army was overwhelmed by a sandstorm and destroyed. Fifty thousand men were lost. Two and a half thousand years later a mutilated corpse is washed up on the banks of the Nile at Luxor, an antiques dealer is savagely murdered in Cairo, and an eminent British archaeologist is found dead at the ancient necropolis of Saqqara. At first the incidents appear unconnected. Inspector Yusuf Khalifa of the Luxor police is suspicious, however. And so too is the archaeologist's daughter, Tara Mullray. As each seeks to uncover the truth, they find themselves thrown together in a desperate race for survival - one that forces them to confront not only present-day adversaries but also ghosts from their own pasts. From a mysterious fragment of ancient hieroglyphic text to rumours of a fabulous lost tomb in the Theban Hills, from the shimmering waters of the Nile to the dusty backstreets of Cairo, Khalifa and Mullray are drawn ever deeper into a labyrinth of violence, intrigue and betrayal. It is a path that will eventually lead them into the forbidding, barren heart of the western desert, and the answer to one of the greatest mysteries of the ancient world . . . At once an adrenaline-packed thriller and a wonderfully evocative archaeological adventure, THE LOST ARMY OF CAMBYSES marks the debut of a great new storyteller.

The Lost Army Of Cambyses Reviews

"'At last, at thriller that gets away from the hackneyed old "curse of Tut" stuff...the fast paced plot is one among many good things in this very assured first novel'" * Scotland on Sunday *
"'A tremendous adventure, one of the most intriguing mysteries of the past, a great novel masterfully written'"

Journalist and novelist Paul Sussman read history at Cambridge, where he won a Joseph Larmor Award and was a Boxing Blue. From an early age his abiding passion was archaeology and he worked in the field, in particular in Egypt (where he was part of the first team to excavate new ground in the Valley of the Kings since the discovery of Tutankhamun's tomb in 1922). He brought this interest and enthusiasm to his novels - The Lost Army of Cambyses, The Last Secret of the Temple, The Hidden Oasis and The Labyrinth of Osiris - which have been translated into over 30 languages and have sold over three million copies. Paul's journalism appeared across the media, including in the Big Issue, Independent, Guardian, Evening Standard and on CNN.com. Paul died suddenly in May 2012, aged 45. He is survived by his wife, a television producer, and their two sons. In 2014, the posthumous publication of what was in fact his first novel - The Final Testimony of Raphael Ignatius Phoenix - fulfilled a long-held wish.

GOR010519636
The Lost Army Of Cambyses by Paul Sussman
Paul Sussman
Used - Like New
Paperback
Transworld Publishers Ltd
2006-06-05
592
0553818031
9780553818031
N/A
Book picture is for illustrative purposes only, actual binding, cover or edition may vary.
The book has been read, but looks new. The book cover has no visible wear, and the dust jacket is included if applicable. No missing or damaged pages, no tears, possible very minimal creasing, no underlining or highlighting of text, and no writing in the margins.