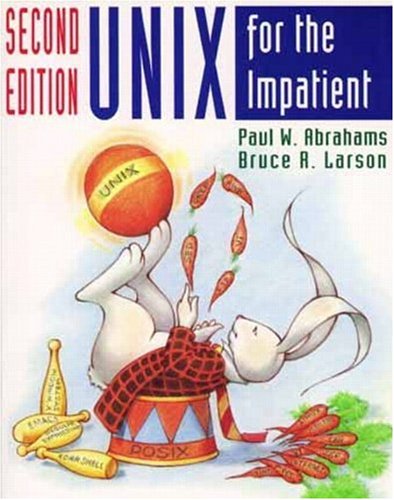 UNIX for the Impatient
by Paul W. Abrahams

UNIX for the Impatient Summary

UNIX for the Impatient by Paul W. Abrahams

Thoroughly updated to account for recent developments, the second edition of this bestselling book is an in-depth, comprehensive guide to UNIX-a handbook you can use both for learning and as a ready reference. The book is written for the technically oriented UNIX user who doesn't want to wade through verbose tutorials, but isn't already an expert. Its functional organization makes it easy to find the right tool for any task, with a complete alphapbetical summary providing fast lookup of commands, options, and subcommands. The Second Edition is based on the IEEE POSX.2 Standard now widely adopted by UNIX vendors and implementors. Topics include user utilities, shells the vi editior and other standard editors, the GNU Emacs editor, Internet access tools, the awk language and the X Windows System. New topics in the second edition include the KornShell, internationalization, the World Wide Web, newsreaders, and systems administrators from the user's perspective. Background material now includes poplular new systems such as Linux and FreeBSD.

Paul W. Abrahams, Sc.D., CCP, is the author of TeX for the Impatient, a book whose success inspiredUNIX for the Impatient. A consulting computer scientist and past president of the Association for Computing Machinery, he specializes in programming languages, design and implementation of software systems, and technical writing. He received his bachelor's degree in mathematics from the Massachusetts Institute of Technology in 1956 and his doctorate in mathematics there in 1963, studying artificial intelligence under Marvin Minsky and John McCarthy and writing his dissertation on "Machine Verification of Mathematical Proof". He is one of the designers of the first LISP system and also the designer of the CIMS PL/I system, which he developed while a professor at New York University. He also participated in the design of the Software Engineering Design Language (SEDL), developed at the IBM T.J. Watson Laboratories. Currently he is working on the design of SPLASH, a Systems Programming LAnguage for Software Hackers and on a new book, OS/2 for the Impatient. In 1995 he was honored as a Fellow of the ACM. Paul resides in Deerfield, Massachusetts, where he writes, hacks, hikes, hunts wild mushrooms, and listens to classical music. His Internet address is abrahams@acm.org.

Bruce R. Larson is the founder of Integral Resources, a systems integration and UNIX consulting firm, a co-founder of BRInet (1995), which provides Internet connection and consulting services, and a partner in Internet Exchange Limited (1994), which provides dialup and ISDN connectivity in the Boston area. His specialties are shell tools, systems programming, IP and X.25 networks, performance monitoring, software integration, mail systems, and security. He has worked with Solaris, AIX, HPUX, IRIX, SCO UNIX, and other Intel-based UNIX systems. His experience includes configuring and administering Internet domains and connecting UNIX systems to X.25 networks, as well as designing and implementing custom installation scripts, kernel-level data extraction tools, shell tools, a software message switch, and IP-based utilities. From 1979 to 1981, he did software modeling for the Federal Aviation Authority under a grant from the U.S. Department of Transportation; in 1988 he received his bachelor's degree in pure mathematics from the University of Massachusetts at Boston. A member of UniForum, the IEEE Computer Society, and the American Mathematical Society, Bruce resides in Milton, Massachusetts. His Internet address is blarson@ires.com

Appendix B. Comparison of MS-DOS and UNIX.
Treatment of Files.MS-DOS Commands and Their UNIX Equivalents.Other Related Features.

GOR001165131
UNIX for the Impatient by Paul W. Abrahams
Paul W. Abrahams
Used - Very Good
Hardback
Pearson Education (US)
1995-09-07
864
0201823764
9780201823769
N/A
Book picture is for illustrative purposes only, actual binding, cover or edition may vary.
This is a used book - there is no escaping the fact it has been read by someone else and it will show signs of wear and previous use. Overall we expect it to be in very good condition, but if you are not entirely satisfied please get in touch with us.