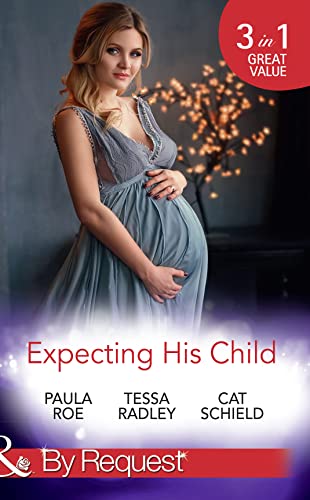 Expecting His Child
by Paula Roe

The Pregnancy Plot by Paula Roe

Expecting His Child: The Pregnancy Plot / Staking His Claim / A Tricky Proposition by Paula Roe

The Pregnancy Plot by Paula Roe

After one mind-blowing night Matthew Cooper never expected to see AJ Reynolds again. But when they are unexpectedly thrown together at a wedding, Matt gives in to temptation. And Matt can help AJ get the one thing she wants... if she's willing to admit that one night wasn't enough!

Staking His Claim by Tessa Radley

Ella had it all: career, apartment, independence. That is until her sister, Keira, asked a favour she couldn't refuse...to give Keira a baby. But now her sister has second thoughts and Ella will be left with a baby she never planned to keep - until the baby's father proposes a solution...

A Tricky Proposition by Cat Shield

Ming Campbell is no longer in the market for love; however, starting a family is at the top of her to-do list. There's no one better to assist than her best friend, Jason Sinclair. Only Jason has a proposal of his own: conceive their child the old-fashioned way!

Former PA, office manager, theme park hostess, software trainer, aerobics instructor and Wheel of Fortune contestant, Paula Roe is now a Borders Books best seller and one Australia's Desire authors. She lives in Sydney, Australia and when she's not writing, Paula designs websites, judges writing contests, battles a social media addiction, watches way too much TV and reads a lot. And bakes a pretty good carrot cake, too! Tessa Radley loves traveling, reading and watching the world around her. As a teen, Tessa wanted to be a foreign correspondent. But after completing a bachelor of arts degree and marrying her sweetheart, she ended up practicing as an attorney in a city firm. A break spent traveling through Australia re-awoke the yen to write. When she's not reading, traveling or writing, she's spending time with her husband, her two sons or her friends. Find out more at www.tessaradley.com. Cat Schield lives in Minnesota with her daughter, their opiniated Burmese cats and a silly Doberman puppy. Winner of the Romance Writers of America 2010 Golden Heart (R) for series contemporary romance, when she's not writing sexy, romantic stories for Harlequin Desire, she can be found sailing with friends on the St. Croix River or in more exotic locales like the Caribbean and Europe. You can find out more about her books at www.catschield.net.

GOR008625135
Expecting His Child: The Pregnancy Plot / Staking His Claim / A Tricky Proposition by Paula Roe
Paula Roe
Used - Very Good
Paperback
HarperCollins Publishers
2017-08-10
576
0263929795
9780263929799
N/A
Book picture is for illustrative purposes only, actual binding, cover or edition may vary.
This is a used book - there is no escaping the fact it has been read by someone else and it will show signs of wear and previous use. Overall we expect it to be in very good condition, but if you are not entirely satisfied please get in touch with us.