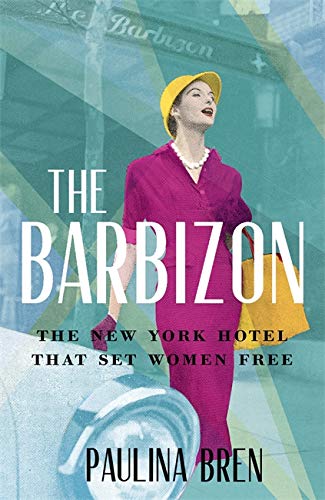 The Barbizon by Paulina Bren

A glamorous social history of the women-only New York hotel that changed the world and its famous guests from Joan Crawford and Grace Kelly to Sylvia Plath and Joan Didion.

The Barbizon: The New York Hotel That Set Women Free by Paulina Bren

WELCOME TO THE BARBIZON, NEW YORK'S PREMIER WOMEN-ONLY HOTEL
Built in 1927 as a home for the 'Modern Woman' seeking a career in the arts, the Barbizon became the place to stay for ambitious, independent women, who were lured by the promise of fame and good fortune. Sylvia Plath fictionalized her time there in The Bell Jar, and over the years, its 688 tiny floral 'highly feminine boudoirs' also housed Joan Crawford, Grace Kelly (notorious for sneaking in men), Joan Didion, Candice Bergen, Charlie's Angel Jaclyn Smith, Ali MacGraw, Cybil Shepherd, Elaine Stritch, Liza Minnelli, Eudora Welty, The Cosby Show's Phylicia Rashad, Grey Gardens's Edith Bouvier Beale, and writers Mona Simpson and Ann Beattie, among many others. Mademoiselle boarded its summer interns there - perfectly turned-out young women, who would never be spotted hatless - as did Katherine Gibbs Secretarial School its students - in their white-gloves and kitten heels - and the Ford Modelling Agency its young models.

THE BARBIZON is a colourful, glamorous portrait of the lives of the young women, who -- from the Jazz Age New Women of the 1920s to the Liberated Women of the 1960s -- came to New York looking for something more.
'The story of the Barbizon is in many ways the story of American women in the twentieth century' Economist
'Illuminating . . . this vivid, well researched account is testament to its vibrant history and the women who made it such a powerhouse' Daily Express

[An] insightful, well-written account...[Bren] details the lives of some of the Barbizon's most well-known residents, including Molly Brown, Grace Kelly, Sylvia Plath, and Joan Didion, and provides historical context about midcentury single women, careers, and sex...A must read for anyone interested in the history of 20th-century women's lives, fashion, publishing, and New York. * Library Journal *
Varying delectably in cadence, from high-heel tapping and typewriter clacking to sinuous and reflective passages analyzing the complex forms of adversity Barbizon women faced over the decades, Bren's engrossing and illuminating inquiry portrays the original Barbizon as a vital microcosm of the long quest for women's equality. * Booklist *
A rare glimpse behind the doors of New York's famous women-only residential hotel...Drawing on extensive research, extant letters, and numerous interviews, Bren beautifully weaves together the political climate of the times and the illuminating personal stories of the Barbizon residents...Elegant prose brings a rich cultural history alive. * Kirkus Reviews *
An entertaining and enlightening account of New York's Barbizon Hotel and the role it played in fostering women's ambitions in 20th-century America...Carefully researched yet breezily written, this appealing history gives the Barbizon its rightful turn in the spotlight. * Publishers Weekly *
Before Sex and the Single Girl, before "Sex and the City," there was the Barbizon. It was a romantic building with a romantic purpose: It fixed a woman up with her dreams. Paulina Bren has written a stylish, charming history of a unique institution, brimming with aspiration and idiosyncrasy, and one that allowed a woman to survive without either marrying someone or cooking him dinner - even when she was barred from so much as taking a seat at the bar. * STACY SCHIFF, author of The Witches and Pulitzer Prize Winner *
Residents of the Barbizon Hotel were once described as 'young women alone.' Thanks to Paulina Bren, they are alone no longer. The Barbizon is a fascinating social history of a forgotten place and time and an intimate portrait of women, trying to find their way in a pre-feminist world. I'll never look at a hotel and think the same way again. * KEITH O'BRIEN, New York Times bestselling author of Fly Girls *
This is the history I've been wanting to read all my life. I just didn't know where to look. How delightful to find it in the legacy of this magical hotel, captured in brilliant detail by the masterful Paulina Bren. Even if you can't move into the Barbizon, reading this book will make you feel like you've lived there for years. You'll never want to move out. * MEGHAN DAUM, author of The Problem With Everything: My Journey Through The New Culture Wars *
From famous models to Joan Didion, from hopeful stenographers to Sylvia Plath. The Barbizon housed women who eagerly sought independence, adventure, and careers in New York City. Besides the story of the famous women-only hotel, The Barbizon chronicles key aspects of American women's history in the first half of the twentieth century. A compelling read! * LYNN DUMENIL, author The Second Line of Defense: American Women and World War I *
Touching in its loyalty to these women, the ones who arrived with suitcases and dreams in the Barbizon's grand lobby. Bren draws on an impressive amount of archival research, and pays tender attention to each of the women she profiles. * International New York Times *
This vivid, well-researched account is testimony to its vibrant history and the women who made it such a powerhouse. * Daily Express *
A fascinating look at a piece of hidden female history. The fortunes of the hotel are entwined with the changing role of women in the 20th century. It's timely too: 100 years afterit was built, in the wake of #MeToo and the death of Sarah Everard, the idea of a women-only hotel feels not anachronistic but liberating. * The Sunday Times *
Paulina Bren is a professor at Vassar College in New York, where she teaches international studies, gender, and media. She is the author of a prize-winning book about soap operas and communism behind the Iron Curtain and co-editor of a collection on consumerism in the Eastern Bloc. Born in the former Czechoslovakia, Paulina spent her childhood in the U.K. before moving to the United States. She attended Wesleyan University as an undergraduate, later receiving an M.A. in International Studies from the University of Washington and a Ph.D. in History from New York University. She has held a host of research grants and fellowships, including residencies in Berlin, Budapest, Vienna, and Atlanta. She currently lives in the Bronx with her husband and daughter.
NGR9781529393026
9781529393026
1529393027
The Barbizon: The New York Hotel That Set Women Free by Paulina Bren
Paulina Bren
New
Hardback
John Murray Press
2021-03-18
336
N/A
Book picture is for illustrative purposes only, actual binding, cover or edition may vary.
This is a new book - be the first to read this copy. With untouched pages and a perfect binding, your brand new copy is ready to be opened for the first time
Trustpilot