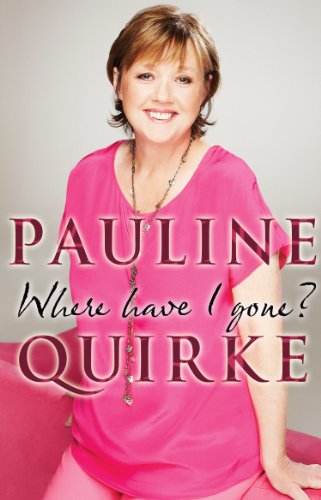 Where Have I Gone?
by Pauline Quirke

In Stock
£11.99
Pauline Quirke was a skinny child, a slim teenager, a curvy woman, then -- according to her bathroom scales (curse them) - just plain fat.
Very Good Well Read
Only 1 left

Where Have I Gone? Summary

Where Have I Gone? by Pauline Quirke

Pauline Quirke was a skinny child, a slim teenager, a curvy woman, then -- according to her bathroom scales (curse them) - just plain fat. Yes, the 'F' word. Tipping the scales at nearly 20 stone, with creaking knees and a dodgy ankle to boot, at the beginning of 2011 Pauline had reached a crisis point. Something had to change, and fast. It was never going to be an easy ride, but with her trademark warmth and sense of humour, Pauline recounts the highs and lows of the rollercoaster year in which she whips herself, and her life, into shape - with a fair few tales from her celebrated forty-year acting career thrown into the bargain. She reveals all: from the strain of working long hours away from home on one of Britain's most popular soaps to renewing her wedding vows and reuniting with her Birds of a Feather co-stars; from battling the bulge and facing the naysayers to rediscovering the joys of airline travel . . . without a seatbelt extension. Honest and revealing, Where Have I Gone? is brimming with brilliantly funny anecdotes and truly moving moments. So put your feet up and join Pauline as she embarks on the most incredible year of her life.

Where Have I Gone? Reviews

"Funny, moving and brimming with anecdotes and honesty, we loved this inspirational story." * Closer *
"Quirke relates her year-long battle to gain control of her weight . . . also recalling the highs and lows of her 40-year acting career with characteristic humour and honesty." * Choice *

Pauline Quirke began her career in television at just eight years old, appearing in Dixon of Dock Green. She went on to host children's TV series in the 1970s, before taking a role in The Elephant Man. In 1989 Pauline was cast as loveable loudmouth Sharon Theodopolopodous in Birds of a Feather, which turned her into a household name. She remained with the series until its conclusion in 1998 after over 100 episodes, before gaining critical acclaim for performances in Down to Earth and The Sculptress. After recent roles in Skins, The Bill and Casualty, Pauline joined the cast of Emmerdale where she played the part of chirpy chatterbox Hazel Rhodes.

GOR009970366
Where Have I Gone? by Pauline Quirke
Pauline Quirke
Used - Very Good
Paperback
Transworld Publishers Ltd
2018-07-27
304
0552175234
9780552175234
N/A
Book picture is for illustrative purposes only, actual binding, cover or edition may vary.
This is a used book - there is no escaping the fact it has been read by someone else and it will show signs of wear and previous use. Overall we expect it to be in very good condition, but if you are not entirely satisfied please get in touch with us.