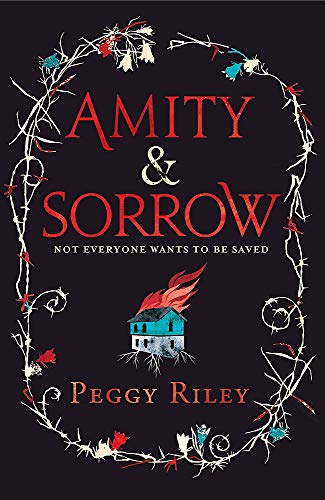 Not everyone wants to be saved.

AMITY & SORROW is a story about God, sex, and farming. It's THE LOVELY BONES meets WITNESS: an unforgettable journey into the horrors a true believer can inflict upon his family, and what it is like to live when the end of the world doesn't come.

In the wake of a suspicious fire, Amaranth gathers her barely-teenage daughters, Amity and Sorrow, and flees from the cult her husband ran. After four days of driving, Amaranth crashes the car, leaving the family stranded at a gas station. Rescue comes in the unlikely form of a downtrodden farmer, a man who offers sanctuary when the women need it most.
AMITY & SORROW is the story of these remarkable women, their lives before the night they fled, and their heartbreaking, hopeful future. For, while Amity blossoms in this new world, Sorrow will move heaven and earth trying to get back home.
And, meanwhile, the outside world hasn't forgotten about the fire on the compound.

'Amity & Sorrow, grace and hope, honor and innocence, bliss and deliverance - all of this from one beautifully nuanced story about the nature of family and the power of faith. I savored every word' * Lori Lansens, author of The Girls *
'A startlingly original, intelligent and beautiful first novel that I found riveting from page one. I can only wait with great anticipation for what comes next from Peggy Riley' * Michael Connelly *
One of the most exciting books to be published this year * Good Housekeeping *
[A] delicately stitched, finely patterned and poetic novel... packed with shock and hope * New York Times *
Once in a while a book comes along that can not only grip you but keep you thinking long after the last page. Enter Amity & Sorrow... a stunningly original contemporary classic [with] remarkable characterisation and intense plot. I urge you to read Riley's novel * Stylist *
A story about God, Sex and Farming, as two girls do a runner from a cult. It's ace * Heat *
A debut that will haunt and inspire * Elle *
A literary page-turner... her writing is clear, crisp * Reader's Digest *
A taut debut, this will appeal to fans of Emma Donoghue's Room * Grazia *
'An impressive and often pretty harrowing debut novel [with] strength and power * Daily Mail *

Peggy Riley is a writer and playwright. She recently won a Highly Commended prize in the 2011 Bridport Prize and was published in their latest anthology. Her short fiction has been broadcast on BBC Radio and published in Mslexia Magazine and as an app on Ether Books. Her plays have been commissioned and produced off-West End, regionally, and on tour. She has been a festival producer, a bookseller, and writer-in-residence at a young offender prison. Originally from LA, Peggy now lives in Kent.

GOR004716314
Amity & Sorrow by Peggy Riley
Peggy Riley
Used - Very Good
Hardback
Headline Publishing Group
2013-03-26
336
0755394364
9780755394364
N/A
Book picture is for illustrative purposes only, actual binding, cover or edition may vary.
This is a used book - there is no escaping the fact it has been read by someone else and it will show signs of wear and previous use. Overall we expect it to be in very good condition, but if you are not entirely satisfied please get in touch with us.