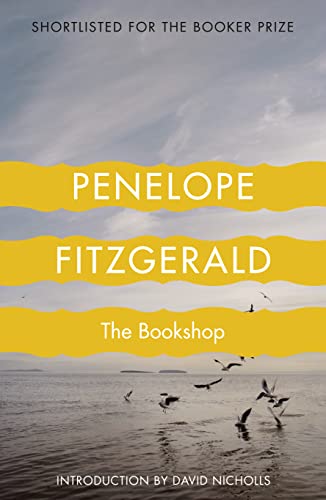 The Bookshop
by Penelope Fitzgerald

The Bookshop by Penelope Fitzgerald

This, Penelope Fitzgerald's second novel, was her first to be shortlisted for the Booker Prize. It is set in a small East Anglian coastal town, where Florence Green decides, against polite but ruthless local opposition, to open a bookshop. `She had a kind heart, but that is not much use when it comes to the matter of self-preservation.'

Hardborough becomes a battleground, as small towns so easily do. Florence has tried to change the way things have always been done, and as a result, she has to take on not only the people who have made themselves important, but natural and even supernatural forces too. This is a story for anyone who knows that life has treated them with less than justice.

`Its stylishness, and this low-voiced lack of emphasis are a pleasure throughout, its moral and human positions invariably sympathetic. But it is astringent too: no self-pity in its self-effacing heroine, who in a world of let-downs and put-downs and poltergeists, keeps her spirit bright and her book-stock miraculously dry in the damp, seeping East Anglian landscape.' Isabel Quigley, Financial Times

`Penelope Fitzgerald's resources of odd people are impressively rich. Raven, the marshman, who ropes Florence in to hang on to an old horse's tongue while he files the teeth; old Brundish, secretive as a badger, slow as a gorse bush. And this is not just a gallery of quirky still lives; these people appear in vignettes, wryly, even comically animated...On any reckoning, a marvellously piercing fiction.' Valentine Cunningham, TLS

Penelope Fitzgerald was the author of nine novels, three of which - The Bookshop, The Beginning of Spring and The Gate of Angels - were shortlisted for the Booker Prize. She won the prize in 1979 for Offshore. A superb biographer and critic, she was also the author of lives of the artist Edward Burne-Jones, the poet Charlotte Mew and The Knox Brothers, a study of her remarkable family. She died in April 2000.

GOR001116618
The Bookshop by Penelope Fitzgerald
Penelope Fitzgerald
Used - Very Good
Paperback
HarperCollins Publishers
1998-01-03
176
0006543545
9780006543541
N/A
Book picture is for illustrative purposes only, actual binding, cover or edition may vary.
This is a used book - there is no escaping the fact it has been read by someone else and it will show signs of wear and previous use. Overall we expect it to be in very good condition, but if you are not entirely satisfied please get in touch with us.