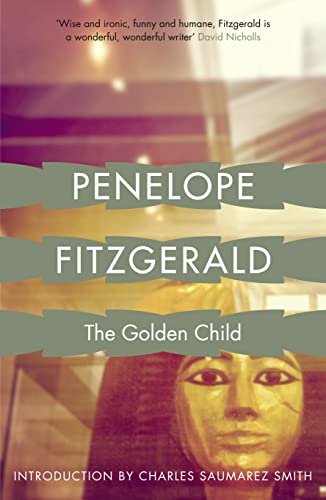 The Golden Child
by Penelope Fitzgerald

`The Golden Child', Penelope Fitzgerald's first work of fiction, is a classically plotted British mystery centred around the arrival of the Golden Child at a London museum.

The Golden Child by Penelope Fitzgerald

`The Golden Child', Penelope Fitzgerald's first work of fiction, is a classically plotted British mystery centred around the arrival of the Golden Child at a London museum.

Far be it for the hapless Waring Smith, junior officer at a prominent London museum, to expect any kind of thanks for his work on the opening of the year's biggest exhibition - The Golden Child. But when he is nearly strangled to death by a shadowy assailant and packed off to Moscow to negotiate with a mysterious curator, he finds himself at the centre of a sinister web of conspiracy, fraudulent artifacts and murder...

Her first novel and a comic gem, `The Golden Child' is written with the sharp wit and unerring eye for human foibles that mark Penelope Fitzgerald out as a truly inimitable author, and one to be cherished.

`The Golden Child is rich in the qualities which have marked Fitzgerald's subsequent career; a pleasantly uncluttered prose style; an eye for the absurd and pretentious; the knack of being able to give comedy an undertow of menace. Most museums take themselves too seriously: here is the perfect riposte.' Sunday Telegraph

`Penelope Fitzgerald combines some gentle mockery of museum bureaucracy and procedures and some sharp parodies - of memos, structuralist lectures, children's essays and committee jargon - with a more serious view of the responsibilities of museums. She shows culture off-handedly inflicted by curators on a patient, suffering public, who are depicted as endlessly queuing and being systematically denied information and tea.' TLS

`Penelope Fitzgerald's first novel degenerates amusingly into tortuous espionage, giving hints of the wit and wisdom to come in her later award-winning books.' Mail on Sunday

GOR001425039
The Golden Child by Penelope Fitzgerald
Penelope Fitzgerald
Used - Very Good
Paperback
HarperCollins Publishers
1994-06-13
192
0006546250
9780006546252
N/A
Book picture is for illustrative purposes only, actual binding, cover or edition may vary.
This is a used book - there is no escaping the fact it has been read by someone else and it will show signs of wear and previous use. Overall we expect it to be in very good condition, but if you are not entirely satisfied please get in touch with us.