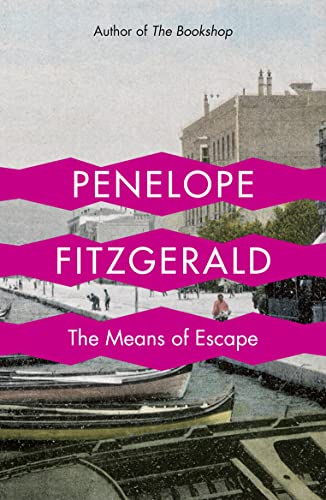 The Means of Escape
by Penelope Fitzgerald

The Means of Escape Summary

The Means of Escape by Penelope Fitzgerald

Penelope Fitzgerald was one of the most highly-regarded writers on the English literary scene. Apart from Iris Murdoch, no other writer has been shortlisted so many times for the Booker. Her last novel, `The Blue Flower', was the book of its year, garnering extraordinary acclaim in Britain, America and Europe.

This superb collection of stories, originally published in anthologies and newspapers, shows Penelope Fitzgerald at her very best. From the tale of a young boy in 17-century England who loses a precious keepsake and finds it frozen in a puddle of ice, to that of a group of buffoonish amateur Victorian painters on a trip to Brittany, these stories are characteristically wide ranging, enigmatic and very funny. They are each miniature studies of the endless absurdity of human behaviour.

The Means of Escape Reviews

`Of all the novelists in English in the last quarter-century, she has the most inarguable claim on greatness. This is a small book, probably not above 25,000 words, but a remarkably rich one. It sets the seal on a career we, as readers, can only count ourselves lucky to have lived through.' Philip Hensher, Spectator

`So readable, so sharply tender, at the top of her form.' Adam Mars-Jones, Observer

`As succinct, droll and individual as Fitzgerald has, over the years, given us every right to expect.' Sunday Times

`Eight masterpieces, polished and perfect, and with such mesmerising characters that each story is equal to any novel.' Polly Samson, Independent `Books of the Year'

Penelope Fitzgerald was one of the most elegant and distinctive voices in British fiction. Three of her novels, The Bookshop, The Beginning of Spring and The Gate of Angels have been shortlisted for the Booker Prize. She won the Prize in 1979 for Offshore. Her last novel, The Blue Flower, was the most admired novel of 1995, chosen no fewer than nineteen times in the press as the `Book of the Year'. It won America's National Book Critics' Circle Award, and this helped to introduce her to a wider international readership. She died in April 2000, at the age of eighty-three.

NGR9780007105014
The Means of Escape by Penelope Fitzgerald
Penelope Fitzgerald
New
Paperback
HarperCollins Publishers
2001-10-15
176
0007105010
9780007105014
N/A
Book picture is for illustrative purposes only, actual binding, cover or edition may vary.
This is a new book - be the first to read this copy. With untouched pages and a perfect binding, your brand new copy is ready to be opened for the first time.