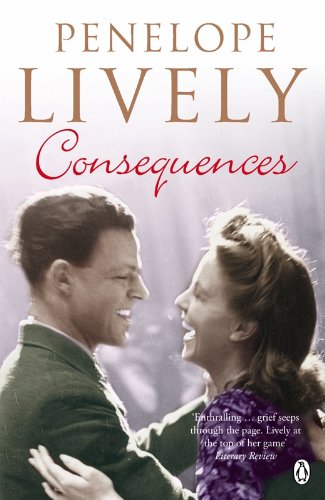 In Stock
£4.99
In 1935, privileged misfit Lorna meets the love of her life. Falling for a pennyless and bohemian artist, Matt, she abandons her stuffy Kensington existence in London and moves to a rustic cottage in Somerset. A baby, Molly, is born, but the coming war takes Matt - and Lorna's dreams - away.
Like New Very Good Good
Only 2 left

A hugely satisfying and romantic novel, in Consequences Penelope Lively plots the lives of three generations of twentieth-century women.

In 1935, privileged misfit Lorna meets the love of her life. Falling for a pennyless and bohemian artist, Matt, she abandons her stuffy Kensington existence in London and moves to a rustic cottage in Somerset. A baby, Molly, is born, but the coming war takes Matt - and Lorna's dreams - away.

Lorna's decisions and their unforeseeable consequences come to shape the stories first of her daughter, Molly, and then her granddaughter, Ruth.

Consequences tells of three generations of women in their own twentieth-century times united by their shared experiences of love, pain, fate and happiness . . .

'A flawlessly constructed mini-epic that will delight' Daily Telegraph

'Nourishing fare from a writer on sparkling form' Daily Mail

Penelope Lively is the author of many prize-winning novels and short-story collections for both adults and children. She has twice been shortlisted for the Booker Prize: once in 1977 for her first novel, The Road to Lichfield, and again in 1984 for According to Mark. She later won the 1987 Booker Prize for her highly acclaimed novel Moon Tiger. Her other books include Going Back; Judgement Day; Next to Nature, Art; Perfect Happiness; Passing On; City of the Mind; Cleopatra's Sister; Heat Wave; Beyond the Blue Mountains, a collection of short stories; Oleander, Jacaranda, a memoir of her childhood days in Egypt; Spiderweb; her autobiographical work, A House Unlocked; The Photograph; Making It Up; Consequences; Family Album, which was shortlisted for the 2009 Costa Novel Award, and How It All Began. She is a popular writer for children and has won both the Carnegie Medal and the Whitbread Award. She was appointed CBE in the 2001 New Year's Honours List, and DBE in 2012. Penelope Lively lives in London.

Penelope Lively has written many prize-winning novels for adults and children. They include: The Road To Lichfield, According To Mark, Moon Tiger (which won the 1987 Booker Prize), Heat Wave, Spiderweb, The Photograph and Making It Up. Penelope Lively lives in London.

GOR010507525
Consequences by Penelope Lively
Penelope Lively
Used - Like New
Paperback
Penguin Books Ltd
2008-05-29
320
0141021284
9780141021287
Winner of Man Booker Prize for Fiction 2009
Book picture is for illustrative purposes only, actual binding, cover or edition may vary.
The book has been read, but looks new. The book cover has no visible wear, and the dust jacket is included if applicable. No missing or damaged pages, no tears, possible very minimal creasing, no underlining or highlighting of text, and no writing in the margins.