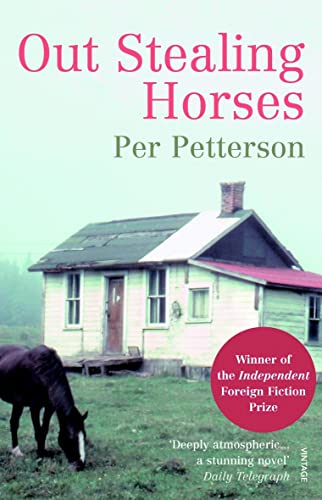 Out Stealing Horses
by Per Petterson

In Stock
£4.99
In 1948, when he is fifteen, Trond spends a summer in the country with his father. But a chance encounter with a character from the fateful summer of 1948 brings the painful memories of that year flooding back, and will leave Trond even more convinced of his decision to end his days alone.
Like New Very Good Good Well Read
28 in stock

Out Stealing Horses by Per Petterson

In 1948, when he is fifteen, Trond spends a summer in the country with his father. The events - the accidental death of a child, his best friend's feelings of guilt and eventual disappearance, his father's decision to leave the family for another woman - will change his life forever. An early morning adventure out stealing horses leaves Trond bruised and puzzled by his friend Jon's sudden breakdown. The tragedy which lies behind this scene becomes the catalyst for the two boys' families gradually to fall apart. As a 67-year-old man, and following the death of his wife, Trond has moved to an isolated part of Norway to live in solitude. But a chance encounter with a character from the fateful summer of 1948 brings the painful memories of that year flooding back, and will leave Trond even more convinced of his decision to end his days alone.

"Lyrical, deceptively clever...the way the story folds together like the petals of a rose is one of the novel's pleasurable surprises...an intelligent journey from boyhood into manhood..." * Daily Telegraph *
"Deeply atmospheric...concise beauty of his prose movingly captures the Norwegian landscape and rural way of life...This stunning novel will tell you more about the Norwegian countryside and psyche than the most enthusiastically well-informed guide book'" * Daily Telegraph *
"Petterson catches so effectively the thing that haunts all of us, the knowledge of how fragile life is...He captures the essence of a man's existence with a clean-lined freshness that hits you like a burst of winter air - surprising and breathtaking...touching humour...the narrative is beautifully balanced...Petterson writes with robust unpretentiousness. His story gathers pace like growing up, and stimulates heart and mind like a brisk country walk." * Daily Express *
"Limpid prose...an impressive novel of rare and exemplary moral courage." * Independent on Sunday *
"A novel of considerable quality." * Scotsman *

Per Petterson was born in Oslo in 1952 and worked for several years as an unskilled labourer and a bookseller. He made his literary breakthrough in 2003 with the prizewinning novel Out Stealing Horses, which has been published in forty-nine languages and won the International IMPAC Dublin Literary Award and the Independent Foreign Fiction Prize.

GOR001180534
Out Stealing Horses by Per Petterson
Per Petterson
Used - Very Good
Paperback
Vintage Publishing
2006-07-06
272
0099506130
9780099506133
Winner of IMPAC Dublin Literary Award 2007
Book picture is for illustrative purposes only, actual binding, cover or edition may vary.
This is a used book - there is no escaping the fact it has been read by someone else and it will show signs of wear and previous use. Overall we expect it to be in very good condition, but if you are not entirely satisfied please get in touch with us.