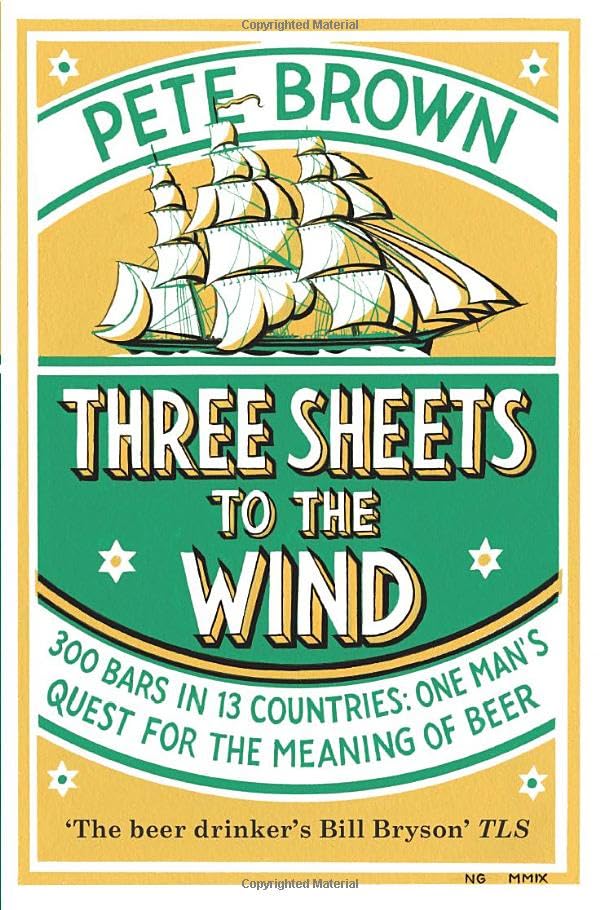 Three Sheets To The Wind
by Pete Brown

In Stock
£4.49
If we're living in the global village, where's its pub?
Very Good Good
6 in stock

Three Sheets To The Wind Summary

Three Sheets To The Wind: One Man's Quest For The Meaning Of Beer by Pete Brown

Meet Pete Brown: beer jounalist, beer drinker and author of an irreverent book about British beer, Man Walks Into A Pub. One day, Pete's world is rocked when he discovers several countries produce, consume and celebrate beer far more than we do. The Germans claim they make the best beer in the world, the Australians consider its consumption a patriotic duty, the Spanish regard lager as a trendy youth drink and the Japanese have built a skyscrapter in the shape of a foaming glass of their favourite brew. At home, meanwhile, people seem to be turning their back on the great British pint. What's going on?

Obviously, the only way to find out was to on the biggest pub crawl ever. Drinking in more than three hundred bars, in twenty-seven towns, in thirteen different countries, on four different continents, Pete puts on a stone in weight and does irrecoverable damage to his health in the pursuit of saloon-bar enlightenment.

'A fine book. . . the exact tone that a work on this social drug requires.' The Times

'Over 300 bars later and the man still manages to make you laugh.' Daily Mirror

'Carlsberg don't publish books. But if they did, they would probably come up with Three Sheets to the Wind...' Metro

'A marvellous book which is as enlightening about the countries he visited as any travel guide.' Adventure Magazine

Three Sheets To The Wind Reviews

"In the end, Three Sheets to the Wind demonstrates how, even though we enjoy beer differently, we're all fundamentally the same." --Freetime Magazine
"an epic pub crawl across the globe." --Booklist

Pete Brown was born in 1968 in Barnsley, South Yorkshire. He escaped to university in 1986 to avoid going down the pit (though they were all soon closed, so he needn't have bothered). Since 1991 he has worked in advertising, specializing in marketing beer. He has appeared regularly on television as a beer expert and writes on beer for a variety of publications. He lives in London.

GOR001212015
Three Sheets To The Wind: One Man's Quest For The Meaning Of Beer by Pete Brown
Pete Brown
Used - Very Good
Paperback
Pan Macmillan
2007-05-23
480
0330442473
9780330442473
N/A
Book picture is for illustrative purposes only, actual binding, cover or edition may vary.
This is a used book - there is no escaping the fact it has been read by someone else and it will show signs of wear and previous use. Overall we expect it to be in very good condition, but if you are not entirely satisfied please get in touch with us.