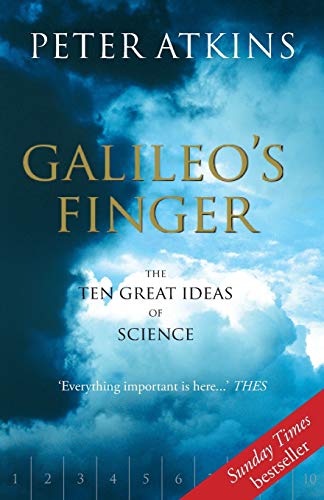 In Stock
£5.99
Any literate person should be familiar with the central ideas of modern science. This book introduces the author's choice of the ten great ideas of science. It aims to lead the reader through the emergence of the concepts, and then present them in an effective manner.
Very Good Good
Only 4 left

Any literate person should be familiar with the central ideas of modern science. In his sparkling new book, Peter Atkins introduces his choice of the ten great ideas of science. With wit, charm, patience, and astonishing insights, he leads the reader through the emergence of the concepts, and then presents them in a strikingly effective manner. At the same time, he works into his engaging narrative an illustration of the scientific method and shows how simple ideas can have enormous consequences. His choice of the ten great ideas are: * Evolution occurs by natural selection, in which the early attempts at explaining the origin of species is followed by an account of the modern approach and some of its unsolved problems. * Inheritance is encoded in DNA, in which the story of the emergence of an understanding of inheritance is followed through to the mapping of the human genome. * Energy is conserved, in which we see how the central concept of energy gradually dawned on scientists as they mastered the motion of particles and the concept of heat. * All change is the consequence of the purposeless collapse of energy and matter into disorder, in which the extraordinarily simple concept of entropy is used to account for events in the world. * Matter is atomic, in which we see how the concept of atoms emerged and how the different personalities of the elements arise from the structures of their atoms. * Symmetry limits, guides, and drives, in which we see how concepts related to beauty can be extended to understand the nature of fundamental particles and the forces that act between them. * Waves behave like particles and particles behave like waves, in which we see how old familiar ideas gave way to the extraordinary insights of quantum theory and transformed our perception of matter. * The universe is expanding, in which we see how a combination of astronomy and a knowledge of elementary particles accounts for the origin of the universe and its long term future. * Spacetime is curved by matter, in which we see the emergence of the theories of special and general relativity and come to understand the nature of space and time. * If arithmetic is consistent, then it is incomplete, in which we learn the origin of numbers and arithmetic, see how the philosophy of mathematics lets us understand the nature of this most cerebral of subjects, and are brought to the limits of its power. C. P. Snow once said 'not knowing the second law of thermodynamics is like never having read a work by Shakespeare'. This is an extraordinary, exciting book that not only will make you literate in science but give you deep enjoyment on the way.

Review from previous edition Peter Atkins aims to give nontechnical but honest explanations of difficult ideas, and gets the level exactly right, perfectly exemplifying Einstein's dictum: [science] should be made as simple as possible, but not simpler. * Sir Michael Berry *
The Nobel Prize for Literature has never been won by a scientist. It is high time it happened, and Peter Atkins would be my candidate. He is not a popularizer of science in the ordinary sense . . . He is not afraid to lead us toward the far horizons of scientific understanding but, rather than oversimplify and trivialise, he uses his powerful mastery of the English language to open our eyes to the poetry of deep science . . . Atkins's literate prose leaves us inspired, fulfilled, enriched, and properly alive. * Richard Dawkins *
...he explains with unusual clarity the deep connections that run through cosmology, the "quantum" realms of the subatomic, the evolution of life and the significance of mathematics in the whole of nature as well as the human mind. It is difficult enough to give an accessible account of any of these themes to a non-scientific readership. That he manages to orchestrate a remarkable symphony while conveying a sense of the drama, complexity and excitement evoked by the ideas is a huge achievement. I would want to place his book in the hands of anybody seeking an overview of science and mathematics ... this book is one of the best panoramic views of nature's extraordinary symmetry, subtlety and mystery currently on offer. * John Cornwell, Sunday Times *
This is a charming and ambitious book that I would not hesitate to recommend as a gift for a young person on the threshold of a scientific career, or as the basis for a course or discussion group on general science. * Nature *
...as close as a general reader can hope to get to understanding the essentials of modern science. Everything important is here... Should you read it if you are not a scientist? Yes ... for breadth and authenticity of material Galileo's Finger is a true model, not available elsewhere as far as I know. * Times Higher Education Supplement *
this has all the virtues of a good textbook. Atkins gives a breathtaking review of present understanding * John Maddox, Times Literary Supplement *
audacious and challenging ... you'll be left with a sense of awe about the structure of the natural world, and the deep connections within it. * Toronto Globe and Mail *

Peter Atkins is the author of about 70 books, including the world-renowned and widely used Physical Chemistry, now in its 10th edition. He won the Grady-Stack award for science journalism in 2016. After graduating from the University of Leicester and a post-doctoral year in the University of California, Los Angeles, he returned to Oxford in 1965 as Fellow of Lincoln College and University Lecturer (later Professor) in physical chemistry. He retired in 2007, but continues to write and lecture worldwide.

GOR001405840
Galileo's Finger: The Ten Great Ideas of Science by Peter Atkins
Peter Atkins
Used - Very Good
Paperback
Oxford University Press
2004-05-27
398
0198609418
9780198609414
N/A
Book picture is for illustrative purposes only, actual binding, cover or edition may vary.
This is a used book - there is no escaping the fact it has been read by someone else and it will show signs of wear and previous use. Overall we expect it to be in very good condition, but if you are not entirely satisfied please get in touch with us.