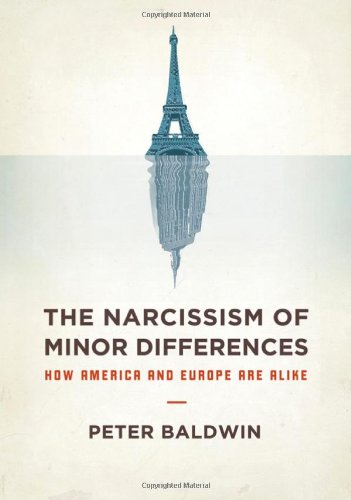 The Narcissism of Minor Differences
by Peter Baldwin

The Narcissism of Minor Differences Summary

The Narcissism of Minor Differences: How Europe and America are Alike by Peter Baldwin

There is much heated rhetoric about the widening gulf between Europe and America. According to the American right, Europeans are lazy, defeatist and irreligious, while Americans are entrepreneurial, optimistic, and pious. And according to Europeans, America is harsh, dominated by the market, crime-ridden, violent, and sharp-elbowed. But are the US and Europe so different? Peter Baldwin, one of the world's leading historians of comparative social policy, thinks not, and in this bracingly argued but remarkably informed polemic, he lays out how similar the two continents really are. Drawing on the latest evidence from sources such as the United Nations, the World Bank, IMF, and other international organizations, Baldwin offers a fascinating comparison of the United States and Europe, looking at the latest statistics on the economy, crime, health care, education and culture, religion, the environment, and much more. It is a book filled with surprising revelations. For most categories of crime, for instance, America is safe and peaceful by European standards. But the biggest surprise is that, though there are many differences between America and Europe, in almost all cases, these differences are no greater than the differences among European nations. Europe and the US are, in fact, part of a common, big-tent grouping. America is not Sweden, for sure. But nor is Italy Sweden, nor France, nor even Germany. And who says that Sweden is Europe? Anymore than Vermont is America? Writing with flair and armed with an impressive stock of evidence, Baldwin paints a truly eye-opening portrait of Europe and America. Anyone interested in American foreign relations-or simply curious about American and European society-will want to read this revelatory volume.

The Narcissism of Minor Differences Reviews

Peter Baldwin is Professor of History at the University of California, Los Angeles. He is the author of Disease and Democracy: The Industrialized World Faces AIDS, Contagion and the State in Europe, 1830-1930, and The Politics of Social Solidarity: Class Bases of the European Welfare State, 1875-1975.

Acknowledgements Introduction 1: The Economy 2: Health Care 3: The Rest of the Welfare State 4: Crime 5: More Broadly 6: Education and the Higher Pursuits 7: The Environment 8: Civil Society 9: Nationalism 10: Religion and Science 11: Assimilation 12: Lumping and Splitting 13: A Meeting of the Twain? 14: Separated at Birth? 15: The Post-Facto State 16: How the West Was One 17: Acorn and Oak

GOR003635191
The Narcissism of Minor Differences: How Europe and America are Alike by Peter Baldwin
Peter Baldwin
Used - Very Good
Hardback
Oxford University Press Inc
2009-11-05
336
0195391209
9780195391206
N/A
Book picture is for illustrative purposes only, actual binding, cover or edition may vary.
This is a used book - there is no escaping the fact it has been read by someone else and it will show signs of wear and previous use. Overall we expect it to be in very good condition, but if you are not entirely satisfied please get in touch with us.