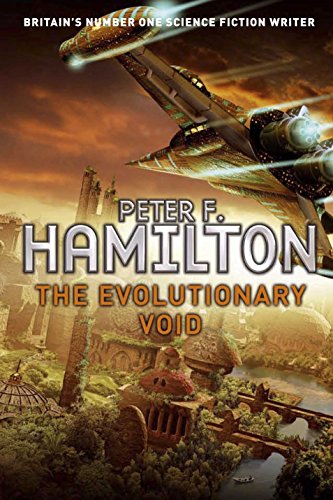 Used Price
£4.49
New RRP £8.99
Free Shipping in the UK
The eagerly awaited conclusion to the trilogy that has captured the imagination of readers and reviewers alike
Reviews:
Trustpilot
Very Good

Peter F. Hamilton's startling perspectives on tomorrow's technological and cultural trends span vast tracts of space and time, his stories are as compelling as they are epic in scope, and yet they are always grounded in characters - human, alien and other - who, for all their strangeness, still touch our hearts and fire our imaginations. Now, in The Evolutionary Void, Hamilton concludes the highly acclaimed, bestselling Void Trilogy that has unfolded in The Dreaming Void and The Temporal Void.

Millions of Leaving Dream pilgrims are on board their immense ultra-drive ships, heading towards - and into - the Void at the heart of the galaxy. There they expect to live perfect lives in a perfectable world, but the cost of this perfection could not be greater. Among those who will do anything and everything to prevent the pilgrims entering the Void is the genius recluse Ozzie, who's not quite the man he used to be - if he's a man at all; Gore Burnelli, the oldest and most influential human being alive; the Delivery Man, a one-time faction agent with devastating firepower at his disposal; and the legendary Paula Myo, the Commonwealth's ruthless, unstoppable field operative. They must succeed if the galaxy is to survive and, needless to say, time is running out . . .

This is epic SF at its very best. The Evolutionary Void will leave no one in doubt as to why Peter F. Hamilton is Britain's number one bestselling SF novelist.

"Spiced with plenty of action and intrigue."--"San Jose Mercury News""Satisfying and powerful . . . space opera doesn't get much more epic than Peter F. Hamilton, something proven in spades in "The Evolutionary Void"."--SFFWorld"Dazzling with complex story lines, compelling characters, and universe-spanning drama."--"Publishers Weekly"

Peter F. Hamilton was born in Rutland in 1960 and still lives nearby. He began writing in 1987, and sold his first short story to Fear magazine in 1988. He has written many bestselling novels, including the Greg Mandel series, the Night's Dawn trilogy, the Commonwealth Saga, the Void trilogy, short-story collections and several standalone novels including Fallen Dragon and Great North Road.