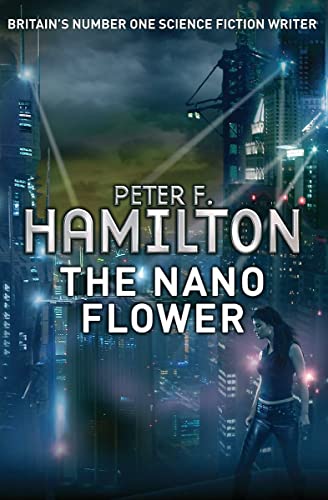 In Stock
£3.99
The third novel in the Greg Mandel series from the master of space opera
Like New Very Good Well Read
Only 1 left

Following Mindstar Rising and A Quantum Murder, the final book in the Greg Mandel trilogy, The Nano Flower by Peter F. Hamilton is a gripping and heart-stopping sci-fi detective story.

Julia Evans, billionairess owner of Event Horizon, has for fifteen years been the power behind England's economic renaissance - but now she's in trouble.

With her husband missing, and rival companies suddenly claiming to have acquired a technology impossibly superior to anything on Earth, she has no time to take notice of a single flower delivered anonymously. But this flower possesses genes millions of years in advance of any terrestrial DNA.

Is it a cryptic alien message, or a poignant farewell token from her husband? One man might discover its origin - but Greg Mandel will not be alone in his desperate search. And, as they both now discover, simply being first in the race isn't nearly good enough when the Nano Flower begins to bloom . . .

"Third (and longest) of the Greg Mandel series, which here reaches another level of excellence...an epic of ultra-technology, alien contact, and a love story that literally spans the stars. Brilliant."--"Locus"

Peter F. Hamilton was born in Rutland in 1960, and still lives near Rutland Water. He began writing in 1987 and sold his first short story to Fear magazine in 1988. His previous novels are the Greg Mandel series and the bestselling Night's Dawn trilogy. Also published by Pan Macmillan are A Second Chance at Eden, a novella and six short stories set in the same brilliantly realized universe, and The Confederation Handbook, a vital guide to the Night's Dawn trilogy. He is also the author of the phenomenal Commonwealth Saga: Pandora's Star and Judas Unchained, and the Void trilogy: The Dreaming Void, The Temporal Void and The Evolutionary Void.

GOR008626106
The Nano Flower by Peter F. Hamilton
Peter F. Hamilton
Greg Mandel
Used - Like New
Paperback
Pan Macmillan
2011-10-07
608
0330537814
9780330537810
N/A
Book picture is for illustrative purposes only, actual binding, cover or edition may vary.
The book has been read, but looks new. The book cover has no visible wear, and the dust jacket is included if applicable. No missing or damaged pages, no tears, possible very minimal creasing, no underlining or highlighting of text, and no writing in the margins.