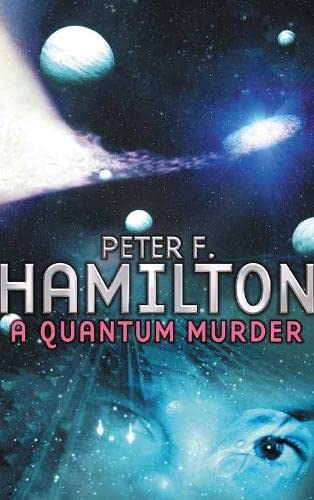 Dr Edward Kitchener, a brilliant researcher into quantum cosmology for the Event Horizon conglomerate . . . but no good to anybody now, lying dead with his lungs spread out on either side of his open chest.

The security system at Launde Abbey was premier-grade, yet a mercenary could still have got through, and plenty of people anxious to stop Kitchener's work would pay the killer's fee. But why would a professional waste time in ritually slaughtering the target?

Event Horizon needs to know fast, so Greg Mandel, psi-boosted ex-private eye, is enticed out of retirement to launch himself on a convoluted trail involving confrontation with a past which - according to Kitchener's theories - might never have happened.

`I cannot recommend this too highly' IAN McDONALD

Peter F. Hamilton was born in Rutland in 1960, and still lives near Rutland Water. His previous novels are the Greg Mandel series and the bestselling 'Night's Dawn' trilogy: The Reality Dysfunction, The Neutronium Alchemist and The Naked God. Also published by Macmillan (and Pan) is A Second Chance at Eden, a novella and six short stories, and The Confederation Handbook, a vital guide to the `Night's Dawn' trilogy. His most recent novels were Fallen Dragon, Misspent Youth and the Commonwealth Saga novels, Pandora's Star and Judas Unchained, the latter to be published in hardcover in October 2005.

GOR001467429
A Quantum Murder by Peter F. Hamilton
Peter F. Hamilton
Used - Very Good
Paperback
Pan Macmillan
1994-06-01
384
0330330454
9780330330459
N/A
Book picture is for illustrative purposes only, actual binding, cover or edition may vary.
This is a used book - there is no escaping the fact it has been read by someone else and it will show signs of wear and previous use. Overall we expect it to be in very good condition, but if you are not entirely satisfied please get in touch with us.