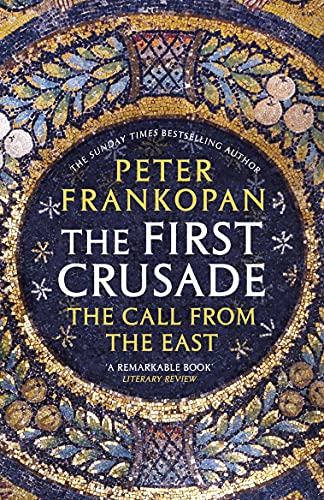 The First Crusade
by Peter Frankopan

In Stock
£4.49
1 bestseller The Silk Roads: A New History of the WorldThe First Crusade is one of the best-known and most written-about events in history but in this new book Dr Peter Frankopan asks vital questions that have never been posed before.
Very Good Good
Only 1 left

The First Crusade: The Call from the East by Peter Frankopan

From the author of the No. 1 bestseller The Silk Roads: A New History of the World The First Crusade is one of the best-known and most written-about events in history but in this new book Dr Peter Frankopan asks vital questions that have never been posed before. *This is the only book to address the history of the First Crusade from the perspective of the east, examining the role of the Byzantine Empire and its ruler, Emperor Alexios I Komnenos. *Peter Frankopan's focus on the imperial city of Constantinople and events in Asia Minor is the result of a major reinterpretation of eastern sources which reveal the crucial role of Byzantium in the genesis and execution of the First Crusade. Frankopan's revelation of a close cooperation between the pope in Rome and the emperor in Constantinople constitutes an important revision and brand new evidence of the history of the Church. This book questions the traditional view that the Catholic and Orthodox churches had broken definitively in 1054. *Rather than viewing the Crusades as a conflict between Christianity and Islam, the book reveals a complex triangular relationship between the west, Byzantium and the Muslim world. So, The First Crusade constitutes a paradigm shift - it radically re-shapes our understanding of the aims, expectations, and long-term implications of the First Crusade and the Crusades as a whole. Most importantly it answers why was there a First Crusade?

"Scholarly and yet accessible, and unashamedly partisan, The First Crusade, as any vibrant history should, is bound to set a lot of feathers flying" * Daily Telegraph *
"Convincing and accessible" * Sunday Times *
"A nuanced and often counterintuitive story of power politics, international diplomacy and war and, ultimately that very rare thing - a truly fresh interpretation of an old story" * Time Out *
"Frankopan's qualities as a historian and writer are of a high order" * BBC History Magazine *
"The best book on the First Crusade ever written" * Prof. Paul Chevedden *

Peter Frankopan is Senior Research Fellow at Worcester College, Oxford and Director the Centre for Byzantine Research at Oxford University. He took a First in History and was Schiff Scholar at Jesus College, Cambridge before completing his doctorate at Oxford, where he was Senior Scholar at Corpus Christi College. He has lectured at leading universities all over the world, including Cambridge, Yale, Harvard, Princeton, NYU, King's College London, and the Institute of Historical Research. His revised translation of The Alexiad by Anna Komnene was published in 2009.

GOR005043969
The First Crusade: The Call from the East by Peter Frankopan
Peter Frankopan
Used - Very Good
Paperback
Vintage Publishing
2013-03-07
288
0099555034
9780099555032
Short-listed for Gladstone History Book Prize 2013 (UK)
Book picture is for illustrative purposes only, actual binding, cover or edition may vary.
This is a used book - there is no escaping the fact it has been read by someone else and it will show signs of wear and previous use. Overall we expect it to be in very good condition, but if you are not entirely satisfied please get in touch with us.