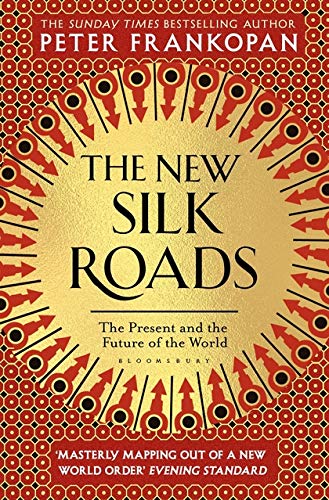 The New Silk Roads: The Present and Future of the World by Peter Frankopan

A brand new book from the Sunday Times and internationally bestselling author of The Silk Roads 'Masterly mapping out of a new world order' - Evening Standard Revised and updated edition The New Silk Roads takes a fresh look at the relationships being formed along the length and breadth of the ancient trade routes today. The world is changing dramatically and in an age of Brexit and Trump, the themes of isolation and fragmentation permeating the western world stand in sharp contrast to events along the Silk Roads, where ties are being strengthened and mutual cooperation established. This prescient contemporary history provides a timely reminder that we live in a world that is profoundly interconnected. Following the Silk Roads eastwards from Europe through to China, by way of Russia and the Middle East, Peter Frankopan assesses the global reverberations of continual shifts in the centre of power - all too often absent from headlines in the west. The New Silk Roads asks us to re-examine who we are and where we stand in the world, illuminating the themes on which all our lives and livelihoods depend. The Silk Roads, a major reassessment of world history, has sold over 1 million copies worldwide.

Masterly mapping out of a new world order ... Peter Frankopan has gone up in the world since his bestselling Silk Roads history was published to great acclaim in 2015 - and deservedly so -- Justin Marozzi * Evening Standard *
I enjoyed The New Silk Roads. I learnt a great deal about recent developments in Central Asia and elsewhere. Frankopan is a brilliant guide to terra incognita -- Niall Ferguson * Sunday Times *
The book is diverting, eclectic and has serious intent. Its thesis that Eurasia is developing a sense of cohesion, largely powered by China's restless ambition, is a sound one -- Roger Boyes * The Times *
Absorbing ... One of the slightly dizzying effects of reading this book is realising the sheer amount of change that has taken place globally in just three years * Irish Times *
Peter Frankopan has written as prescient a modern history as possible ... Frankopan's skill is that he able to step back a few more paces from the world map and global events than most modern commentators, whilst encouraging us to use history as a way of looking forward than regressing into the past -- Total Politics
If you are only going to read one non-fiction book in the coming year, let it be The New Silk Roads by Dr Frankopan ... This book has all the answers and some more * News on Sunday Pakistan *
Entertaining ... Peter Frankopan has a sharp eye for startling facts, and no reader will leave The New Silk Roads with her sense of the state of the world unchanged -- Richard Drayton * Times Literary Supplement *
Frankopan has written another valuable and idiosyncratic book. He has the gift of perspective - the capacity to see the wood for the trees - which he combines with a Tolstoyan knack for weaving little details into the broader sweep of human affairs * Daily Telegraph *
Peter Frankopan's surprise 2015 bestseller The Silk Roads was a gripping world history that centred on the east. His follow-up The New Silk Roads takes the story right up to the present, as a resurgent China seeks to recreate the old trade routes -- Books of the Year * Prospect *
A stimulating primer on modern geopolitics, written with a historian's eye for colour and detail * Daily Telegraph *
Superb -- Amol Rajan * BBC *
An entertaining and carefully researched account of a new Chinese chapter in global history, and one where it finally makes sense to see Eurasia, with Europe at one end and China at the other, as a single connected whole * Spectator *
Filled with an avalanche of remarkable facts ... Peter Frankopan is on a mission to show that the world is no longer all about Europe and the West * Het Financieele Dagblad NL *
Many books have been written that claim to be "A New History of the World". This one fully deserves the title...so ambitious, so detailed and so fascinating -- Praise for 'The Silk Roads' * The Times *
Brilliant and fearless ... This is history on a grand scale -- Praise for 'The Silk Roads', William Dalrymple
This invigorating and profound book has enough storytelling to excite the reader and enough fresh scholarship to satisfy the intellect -- Praise for 'The Silk Roads', Bettany Hughes

Peter Frankopan is Professor of Global History at Oxford University where he is also Senior Research Fellow at Worcester College. The Silk Roads: A New History of the World was published by Bloomsbury in 2015.

CIN000224260
The New Silk Roads: The Present and Future of the World by Peter Frankopan
Peter Frankopan
Used - Like New
Paperback
Bloomsbury Publishing PLC
2019-06-27
368
1526608243
9781526608246
N/A
Book picture is for illustrative purposes only, actual binding, cover or edition may vary.
This is a used book - there is no escaping the fact it has been read by someone else and it will show signs of wear and previous use. Overall we expect it to be in very good condition, but if you are not entirely satisfied please get in touch with us.