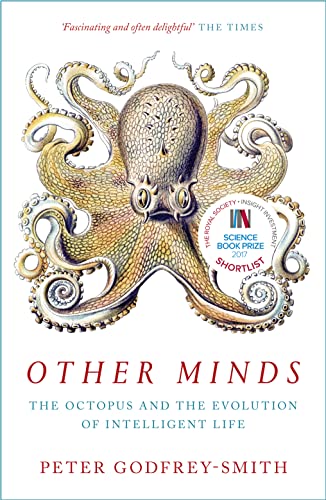 Other Minds
by Peter Godfrey-Smith

Other Minds: The Octopus and the Evolution of Intelligent Life by Peter Godfrey-Smith

What if intelligent life on Earth evolved not once, but twice? The octopus is the closest we will come to meeting an intelligent alien. What can we learn from the encounter?

In Other Minds, Peter Godfrey-Smith, a distinguished philosopher of science and a skilled scuba diver, tells a bold new story of how nature became aware of itself - a story that largely occurs in the ocean, where animals first appeared.

Tracking the mind's fitful development from unruly clumps of seaborne cells to the first evolved nervous systems in ancient relatives of jellyfish, he explores the incredible evolutionary journey of the cephalopods, which began as inconspicuous molluscs who would later abandon their shells to rise above the ocean floor, searching for prey and acquiring the greater intelligence needed to do so - a journey completely independent from the route that mammals and birds would later take.

But what kind of intelligence do cephalopods possess? How did the octopus, a solitary creature with little social life, become so smart? What is it like to have eight tentacles that are so packed with neurons that they virtually 'think for themselves'? By tracing the question of inner life back to its roots and comparing human beings with our most remarkable animal relatives, Godfrey-Smith casts crucial new light on the octopus mind - and on our own.

Praise for Other Minds:

'The beauty of Godfrey-Smith's book lies in the clarity of his writing; his empathy, if you will. He takes us through those early stirrings in the seas of deep time, from bacteria that sense light and can taste, to cnidarian jellyfish, the first organisms to exhibit nervous systems, which he describes wonderfully.' Philip Hoare, Guardian

'Fascinating and often delightful ... This book ingeniously blends philosophy and science to trace the epic journey from single-celled organisms of 3.8 billion years ago to the awakening and development of cephalopod consciousness.' The Times

'In Other Minds, Peter Godfrey-Smith, a philosopher, skilfully combines science, philosophy and his experiences of swimming among these tentacled beasts to illuminate the origin and nature of consciousness.' The Economist

'A delight on so many levels' Dive magazine

'To investigate these astonishing animals with such empathy and rigour is achievement enough. To do so while casting light on the birth and nature of consciousness, as Peter Godfrey-Smith does here, is captivating.' China Mieville, author of Kraken

'I love this book, its masterful blend of natural history, philosophy, and wonder ... It's a captivating story, and Peter Godfrey-Smith brings it alive in vivid, elegant prose ... A must-read for anyone interested in the evolution of the mind - ours and the very other, but equally sentient, minds of the cephalopods.' Jennifer Ackerman, author of The Genius of Birds

Peter Godfrey-Smith is a distinguished professor of history and the philosophy of science at the University of Sydney. He is the author of four books, including Darwinian Populations and Natural Selection, which won the 2010 Lakatos Award for an outstanding work on the philosophy of science. His underwater videos of octopuses have been featured in National Geographic and New Scientist.

NGR9780008226299
Other Minds: The Octopus and the Evolution of Intelligent Life by Peter Godfrey-Smith
Peter Godfrey-Smith
New
Paperback
HarperCollins Publishers
2018-02-01
272
0008226296
9780008226299
N/A
Book picture is for illustrative purposes only, actual binding, cover or edition may vary.
This is a new book - be the first to read this copy. With untouched pages and a perfect binding, your brand new copy is ready to be opened for the first time.