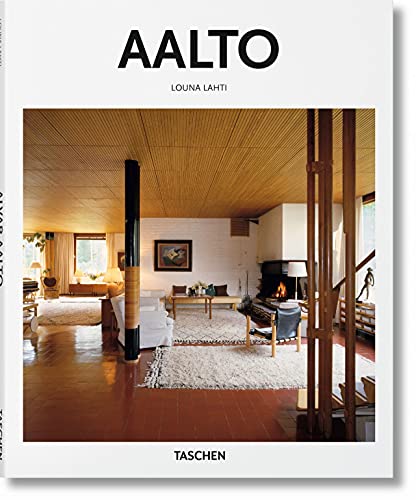 Out of Stock
£11.49
Discover the gentler face of modernism in this introduction to Alvar Aalto, the Finnish architect who defied the slick geometries set by the International Style to prioritize soft, poetic, undulating forms. Whether a villa, a sauna, or a lamp design, Aalto's organic structures championed environmentally sound and progressive design with a deep-...
New£11.49
Only 0 left

Alvar Aalto (1898-1976) made a unique modernist mark. Influenced by both the landscape and the political independence of his native Finland, he designed warm, curving, compassionate buildings, wholly set apart from the slick, mechanistic, geometric designs that characterized much contemporary European practice.

Whether a church, a villa, a sauna, or a public library, Aalto's organic structures tended to replace plaster and steel with brick and wood, often incorporating undulating, wave-like forms, which would also appear in his chair, glassware, and lamp designs. An adherent to detail, Aalto insisted upon the humanity of his work stating: "Modern architecture does not mean using immature new materials; the main thing is to work with materials towards a more human line."

Many of Aalto's public buildings such as Saynatsalo Town Hall, the lecture theatre at Otaniemi Technical University, the Helsinki National Pensions Institute and the Helsinki House of Culture may be seen as psychological as well as physical landmarks in the rebuilding of Finland after the ravages of war.

Born back in 1985, the Basic Art Series has evolved into the best-selling art book collection ever published. Each book in TASCHEN's Basic Architecture series features:

an introduction to the life and work of the architect

the major works in chronological order

information about the clients, architectural preconditions as well as construction problems and resolutions

Finnish-born Louna Lahti worked for the Alvar Aalto Society for many years, first as exhibition secretary and later as treasurer, before establishing her own firm in 1984. She has lectured and published extensively on visual arts and architecture. Peter Goessel runs an agency for museum and exhibition design. He has published TASCHEN monographs on Julius Shulman, R. M. Schindler, John Lautner, and Richard Neutra, as well as several titles in the Basic Architecture series.