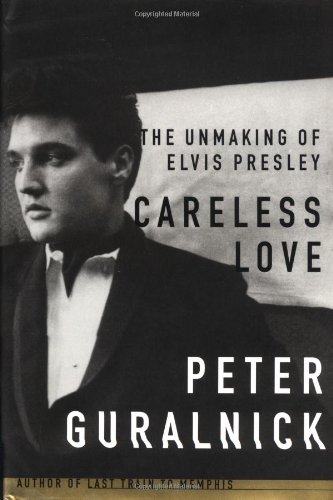 In Stock
£8.99
Recounts the second half of Elvis Presley's life, from his army service in 1958 Germany through his death in 1977, and focuses on his relationship with manager Colonel Tom Parker.
Very Good Well Read
Only 1 left

Careless Love: The Unmaking of Elvis Presley by Peter Guralnick

Here at last is the full, true and mesmerizing story of Elvis Presley's last two decades, in the second volume of Peter Guralnick's two-part biography. Beginning with Presley's army service in Germany in 1958 and ending with his death in Memphis in 1977, Careless Love chronicles the unraveling of the dream that once shone so brightly, homing in on the complex playing-out of Elvis' relationship with his Machiavellian manager, Colonel Tom Parker. It's a breathtaking, revelatory drama that for the first time places the events of a too-often mistold tale in a fresh, believable, and understandable context.

"Riveting...A masterwork."--Wall Street Journal
"Let's get a little loud...Peter Guralnick's two-volume life of Elvis Aron Presley, of which Careless Love is the second installment, is not simply the finest rock-and-roll biography ever written. It must be ranked among the most ambitious and crucial biographical undertakings yet devoted to a major American figure of the second half of the twentieth century."--Gaerald Marzorati, New York Times Book Review
"Nothing written about Elvis Presley comes close to the detail, authority, and uncondescending objectivity that Peter Guralnick has brought to his two-volume biography...Hypnotic."--Andy Seiler, USA Today

Peter Guralnick's books include the prize-winning two-volume biography of Elvis Presley, Last Train to Memphis and Careless Love. He is a recent inductee in the Blues Hall of Fame. Other books include an acclaimed trilogy on American roots music, Sweet Soul Music, Lost Highway, and Feel Like Going Home; the biographical inquiry Searching for Robert Johnson; the novel, Nighthawk Blues, and Dream Boogie: The Triumph of Sam Cooke. His most recent book is Sam Phillips: The Man Who Invented Rock 'n' Roll.

GOR001030500
Careless Love: The Unmaking of Elvis Presley by Peter Guralnick
Peter Guralnick
Used - Very Good
Hardback
Little, Brown & Company
1999-01-08
767
0316332224
9780316332224
N/A
Book picture is for illustrative purposes only, actual binding, cover or edition may vary.
This is a used book - there is no escaping the fact it has been read by someone else and it will show signs of wear and previous use. Overall we expect it to be in very good condition, but if you are not entirely satisfied please get in touch with us.