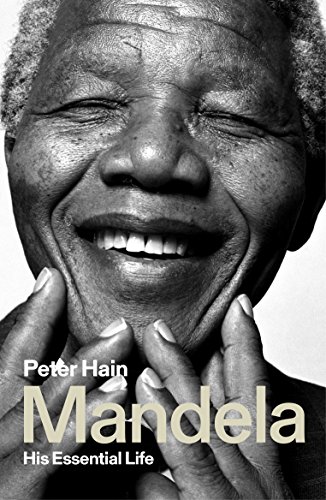 Mandela: His Essential Life is the only short, popular and accessible book that tells Mandela's entire and remarkable story.

Mandela: His Essential Life chronicles the life and legacy of one of the twentieth century's most influential and admired statesmen. Charting his development from remote rural roots to city lawyer, freedom fighter, and then political leader, Peter Hain takes an in-depth look at Mandela's rise through the ranks of the African National Congress (ANC) and subsequent 27 years imprisonment on Robben Island, as increasingly vocal protests against the injustices of Apartheid brought his struggle against overwhelming prejudice and oppression to the eyes of the world. This book encompasses Mandela's inauguration as South Africa's first democratically elected president, his "retirement" campaigns for human rights, a solution to AIDS and poverty. It goes on to chronicle his later years and death. Throughout, the humanity and compassion of this extraordinary world leader shine through. The author concludes with a critical analysis of his and the ANC's achievements, its leadership's subsequent slide into corruption, and whether under new direction South Africa can reclaim the values and legacy of Mandela, and the `rainbow nation' he created and led to such global acclaim.
Passionate and engaging. From a man whose tireless anti-apartheid activism supported the long struggle to free his friend and leader, Nelson Mandela. -- Jon Snow, Broadcaster
Highly readable and inspirational. -- Desmond Tutu
His life and times told succinctly and compellingly. -- Sello Hatang, CEO, Nelson Mandela Foundation
Peter Hain's excellent Mandela: His Essential Life, does not pretend to be anything more than, as he writes, a "short, popular and accessible book that tells Mandela's entire and remarkable story in a nutshell". Actually, he does himself a disservice: it is much more than that, and is a serious analysis of Mandela's place in history, his failings as well as his virtues. It also contains a powerful final chapter on the betrayal of the Mandela legacy. In recent years, Hain, a second-generation anti-apartheid activist, has exposed the corruption of the Zuma presidency, and played no small part in bringing down the PR firm Bell Pottinger. It is a sad sequel to Mandel's life but a story of modern-day South Africa that needs to be told. * The Sunday Times, 15 July 2018 *
Borrowing extensively from works such as Anthony Sampson's Mandela (1999) and Nelson Mandela's own autobiography Long Walk to Freedom (CH, Apr'95, 32-4642), Hain, a former anti-apartheid activist, offers a more condensed biography of the freedom fighter turned statesman, and combines it with personal observations of his encounters with the legendary South African. Hain tracks Mandela's rural roots, political awakening, trial and imprisonment, progressive estrangement from his wife, Winnie, and triumph in South Africa's first democratic election in 1994. Despite several chronological issues (i.e., the Congress of the People took place in June 1955), Hain's narrative of Mandela's long struggle for justice and reconciliation falls in line with other scholarly biographies, even if it does not break new ground. The most original material in Hain's book comes in the later chapters, where he relates several encounters with the man known as Madiba. "It was not just his towering moral stature, his courage and his capacity to inspire that endeared Nelson Mandela to so many," Hain observes. "Despite being one of the world's most prominent statesmen-perhaps the most revered-he retained his extraordinary humanity." Summing Up: Recommended. All readership levels. * CHOICE *
Peter Hain is well known for a lifetime of anti-apartheid campaigning. Born to anti-apartheid activists with links to Mandela going back to the 1950s, he grew up in South Africa where his parents were jailed, then banned and finally exiled to Britain by the regime. The effectiveness of Hain's fervent campaigning in the 1970s made him a target of the regime's security services. Subsequently a Labour MP and government minister, Peter Hain served in several prominent Cabinet positions including Secretary of State for Northern Ireland, Secretary of State for Work and Pensions, and Leader of the House of Commons. He is now a member of the House of Lords. A regular contributor to the daily nationals, he is also the author of 20 books including Don't Play with Apartheid, Mistaken Identity, A Putney Plot?, Sing the Beloved Country and his memoirs Outside In.
Mandela Time Line Preface Introduction: International Icon Chapter 1: Roots Chapter 2: Grooming a Chief Chapter 3: Second Class Chapter 4: Freedom Fighter Chapter 5: Prisoner Chapter 6: Resistance Chapter 7: Victory Chapter 8: President Chapter 9: Mandela Magic Chapter 10: Legacy Betrayed? Selected Bibliography Index About the Author
GOR009356951
9781786607584
1786607581
Mandela: His Essential Life by Peter Hain
Peter Hain
Used - Very Good
Paperback
Rowman & Littlefield International
2018-07-18
232
N/A
Book picture is for illustrative purposes only, actual binding, cover or edition may vary.
This is a used book - there is no escaping the fact it has been read by someone else and it will show signs of wear and previous use. Overall we expect it to be in very good condition, but if you are not entirely satisfied please get in touch with us
Trustpilot